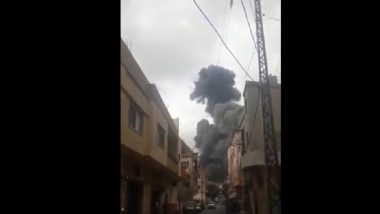 Beirut, September 22: A huge blast rocked Hezbollah Centre in South Lebanon on Tuesday. According to initial reports, the blast struck a house belonging to Iran-backed Hezbollah. Several people were reported injured in the explosion which rocked the village of Ain Qana, in the south of the country. After the blast, a huge cloud of smoke engulfed the area. Lebanon Blast Caught on Camera: Terrifying Videos and Images of Explosion at Beirut Port.

The entire area has been cordoned off by the security forces. According to a report published in Jerusalem Post, the blast occurred at an arms depot of the Shi'ite Muslim. An official with the Shiite militant group Hezbollah confirmed there was an explosion but declined to give further details. Southern Lebanon is considered to be a stronghold of Hezbollah. Lebanon: Massive Blast in Beirut Ahead of Court Verdict in Ex-PM Rafik Hariri's Killing, Over 50 Dead; Watch Horrifying Videos.

Video From The Blast Site:

An arms cache belonging to the #Iran-backed Lebanese group #Hezbollah blew up in southern Lebanon because of a technical error, a security source said. Hezbollah imposed a security cordon around the area of the blast in the village of Ain Qana

The mysterious explosion came almost seven weeks after the massive explosion at Beirut port, the result of nearly 3,000 tons of improperly stored ammonium nitrate detonating. At least 200 people were killed in that explosion, while 6,500 people sustained injuries.

(The above story first appeared on LatestLY on Sep 22, 2020 07:36 PM IST. For more news and updates on politics, world, sports, entertainment and lifestyle, log on to our website latestly.com).