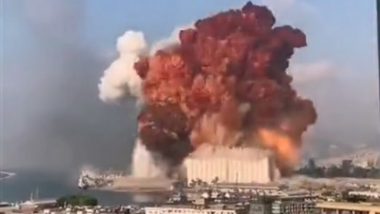 Beirut, August 4: A massive blast rocked the Lebanese capital of Beirut, shortly before a United Nations-monitored court was scheduled to spell out the verdict in the assassination case of former Prime Minister Rafik Hariri. The explosion was reported in the Port area, with reports claiming that the blast was linked to a firecracker warehouse based in the region. Syria: 3 Bombs Explode Near Kurdish Military Prosecutor's Office in Raqqa.

At least 50 people were killed and hundreds were left injured in the blasts, with the preliminary reports yet to confirm the first fatalities. Videos that emerged on social media showed a cloud of rubble in the Port Area, with a section of local media claiming that the blast may lead to more number of deaths than initially reported.

JUST IN: Lebanon's internal security chief tells reporters the blast was in a port area with highly explosive material, not explosives pic.twitter.com/tSRbTEhQcg

Here's a video of the moments following the initial explosion in Beirut before the massive second blast. Appears to be either munitions or fireworks. pic.twitter.com/BPLRi4Nrvs

Watch: Another View of Horrifying Explosion

Another view of the explosions in Beirut pic.twitter.com/efT5VlpMkj

The explosion came less than two hours before UN tribunal's verdict in the murder of ex-PM Hariri. He was assassinated in a car bomb blast in 2005. The court was expected to rule against the four accused, who are yet at large and belong to the Iran-backed Shia militant group Hezbollah.

Among those buildings damaged due to the explosion include the headquarters of former prime minister Saad al Hariri. Visuals emerging from the site showed dozens left with injuries.

Lebanon, over the past six months, is rocked by massive demonstrations over surging unemployment in the nation. The country, according to analysts, is facing the worst crisis since the economic recession of 1975-1990.

(The above story first appeared on LatestLY on Aug 04, 2020 09:42 PM IST. For more news and updates on politics, world, sports, entertainment and lifestyle, log on to our website latestly.com).