US Representative Matt Gaetz allegedly paid women via Apple Pay to have sex at Florida hotels after being introduced to them by former tax collector Joel Greenberg. Multiple women reportedly told the investigators that Gaetz would tell them a place and time to meet and how much he is willing to pay them for sex. 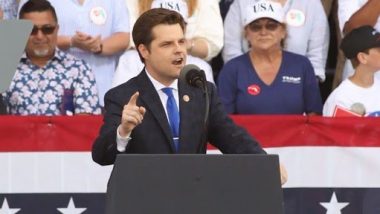 US Representative Matt Gaetz had often appeared on the headlines as a staunch defender of the former US President, Donald Trump. Gaetz, who was elected to Congress in 2016, has been at the centre of a number of controversies in his four-plus years in Congress. But he is embroiled in what could be his biggest scandal yet after the Justice Department began investigating him in the final months of the Trump administration. According to the latest media report, the 38-year-old allegedly paid women via Apple Pay to have sex at Florida hotels after being introduced to them by former tax collector Joel Greenberg. The allegations were detailed in a bombshell report by the New York Times.

The report cited several unnamed sources close to the Department of Justice (DOJ) investigations, including text messages and payment receipts reviewed by the outlet. Multiple women reportedly told the investigators that Gaetz would tell them a place and time to meet and how much he is willing to pay them for sex. They would meet in Florida hotels, where the lawmaker would sometimes take an ecstasy before they had sex. Not only this, the report further revealed that the DOJ investigation is examining whether one of the women involved with Gaetz was 17-years-old at the time and if he paid her or gave her gifts to have sex with him.

The sex trafficking count against Greenberg involved the same girl, as per the women briefed on the investigation. The authorities have also investigated whether other men connected to Gaetz and Greenberg had sex with the 17-year-old. Gaetz has denied having paid anyone for sex and has not yet been charged with any crime. However, the NYT report noted that it had reviewed receipts from Cash App and Apple Pay that show payments from Gaetz and Greenberg to one of the women and a payment from Greenberg to another woman.

The report further adds that it is a violation of federal child sex trafficking law to provide someone under 18 with anything of value in exchange for sex, which can include meals, hotels, alcohol, or cigarettes. A conviction carries a 10-year minimum prison sentence.

(The above story first appeared on LatestLY on Apr 02, 2021 03:18 PM IST. For more news and updates on politics, world, sports, entertainment and lifestyle, log on to our website latestly.com).