Pioneer is The Secret Service Code Name of Kamala Harris; Here's List of Interesting Code Names Picked by Former US Presidents, Their Wives And Prominent Candidates

Indian-American Kamala Harris has chosen "Pioneer" as her code name for Secret Service. 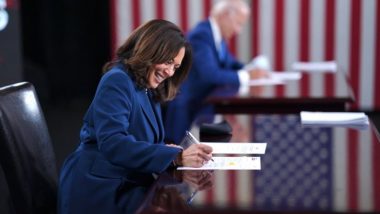 Washington, August 18: Indian-American Kamala Harris, Democratic presidential nominee Joe Biden's running mate (vice presidential candidate) for the November 3 election, has chosen "Pioneer" as her code name for Secret Service. Kamal Harris was given a list approved by the White House Communications Agency for Secret Service call sign, and she picked "Pioneer". Presidential candidate Joe Biden has retained "Celtic" which he had when he served as vice-president under the Obama administration. Who is Kamala Harris? Know All About The Indian-American Senator Who Has Been Nominated by Joe Biden as Vice Presidential Candidate For US Elections 2020.

In 2016 US Presidential Elections, Democrat Hillary Clinton received 2.1 percent more votes nationally than Donald Trump, but was defeated because in the electoral college Trump had 304 electors to her 227. This time, the fight is between Trump and presumptive Democratic presidential nominee Joe Biden.

(The above story first appeared on LatestLY on Aug 18, 2020 11:06 PM IST. For more news and updates on politics, world, sports, entertainment and lifestyle, log on to our website latestly.com).