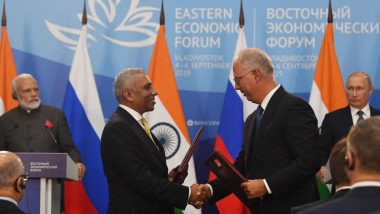 Vladivostok, September 4: Russia on Wednesday said that it is planning to set up more than 20 nuclear power units in India in the next 20 years. Prime Minister Narendra Modi, who arrived in Russia's Far Eastern city of Vladivostok earlier today, gave a joint statement at the 20th Annual Summit between the two countries, along with Russian President Vladimir Putin by side. The two sides exchanged numerous agreements, including military and technical cooperation, energy and science, LNG Business and LNG supplies, and natural gas, in the presence of the two leaders. India, Russia Sign 25 Agreements At 20th Annual Bilateral Summit; PM Narendra Modi Says, 'New Delhi, Moscow Are Against Outside Influence in Internal Matters of Any Nation'.

"I'm honoured to be the first-ever Indian Prime Minister to be coming to Vladivostok. I thank my friend, President Putin for inviting me here. I remember Annual Summit of 2001, first one held in Russia when he was President and I had come with former Prime Minister of India Atal Bihari Vajpayee's delegation as Gujarat Chief Minister," the Prime Minister said in the joint statement.

The leaders, on the occasion, noted that the friendship between India and Russia is not restricted to their respective capital cities. "We have put people at the core of this relationship," the Prime Minister added. Meanwhile, Putin, on his part, said that both countries share similar perspectives on certain aspects of international issues. The President also recalled that he met Prime Minister Modi on the sidelines of the G20 summit recently held in Osaka, Japan, and the Shanghai Cooperation Council (SCO) in the Kyrgyz capital of Bishkek. PM Narendra Modi Arrives at Vladivostok International Airport For 2-Day Visit to Russia, Will Meet Vladimir Putin Today.

"Russia and India today signed MoUs in various sectors, including civil nuclear and LNG. Regarding the Kundakulam nuclear power plant, the first and second units are working. The third and fourth are under construction. In addition, we have also decided to set up more than 20 Russian-designed nuclear units in India in the next 20 years," Putin said.

"I am also looking forward to meeting the Indian Prime Minister at the 11th BRICS Summit that is scheduled to be held in Brasilia, Brazil," he added. Meanwhile, a proposal was also made between India and Russia to have a full-fledged maritime route that serves as a link between Chennai and Vladivostok. "We (India and Russia) both are against outside influence in the internal matters of any nation," Modi stressed in an apparent reference to Pakistan's diabolic attempts of internationalizing the Kashmir issue.  India-Russia Ties: PM Narendra Modi and President Vladimir Putin Reach Zvezda Shipbuilding Complex Via Ship, Watch Video.

The Prime Minister further said that Moscow's decision to confer him with the highest civilian award of the country-- the Order of the Holy Apostle Andrew the First-- is a matter of honour for him as well as the people of India. Upon his arrival, Modi received a Guard of Honour at the Vladivostok International Airport.

Following, he met the Russian President and paid a visit to the 'Zvezda' Shipbuilding Complex and spent "quality time" together onboard a ship as part of a special gesture to further cement cooperation with "a valued friend", according to the Prime Minister's Office. Modi along with Putin will be addressing the 5th Eastern Economic Forum, wherein the former would be batting for more investment and business ventures. In his departure statement ahead of his visit to Russia, Modi had said that strong bilateral partnership is complemented by a desire to promote a multi-polar world.