After falling steadily for days following the Russian invasion of Ukraine, ruble—the Russian currency -- is back despite stringent sanctions slapped by the West against Moscow. On April 1, the ruble was pegged at about 82 to a US dollar while before the invasion the currency was trading at around 76 to a dollar. 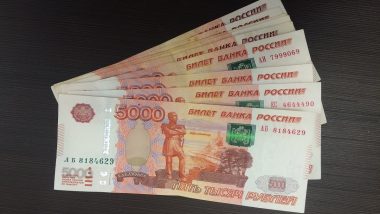 New Delhi, April 5: After falling steadily for days following the Russian invasion of Ukraine, ruble—the Russian currency -- is back despite stringent sanctions slapped by the West against Moscow. On April 1, the ruble was pegged at about 82 to a US dollar while before the invasion the currency was trading at around 76 to a dollar.

Less than a month ago—on March 7, the ruble recorded a new low of about 137 to a dollar. Even as several media organisations including Reuters said that the dramatic ruble rebound does not mean that "Russia's sanctions-savaged economy is out of the woods", analysts told India Narrative that Moscow may have pulled a rabbit out of the hat. Russia-Ukraine War: Bitcoin Now Has Higher Market Cap Than Russian Currency Ruble.

With Russian gold coming under sanctions, the country's gold stocks—from banks as well as individuals could be sold to the central bank. The value of the ruble will further increase once the central bank's gold stocks from domestic sources increase, which is expected to happen in the next few months.

Besides, Russian President Vladimir Putin also signed an agreement under which foreign buyers will be required to pay ruble for gas purchase. Even European countries -- especially the smaller ones -- have now already started to pay ruble to purchase Russian gas.

Any currency backed by gold is perceived to be stabler and stronger. Russia's gold reserves are estimated at more than 2298.53 tonnes. It is the fifth largest in the world, the US ranks number one, followed by Germany, Italy and France.

"Since the payment will have to be done in ruble, the demand for the currency has increased significantly..we expect this trend to continue," Royce Vargheese Joseph, research analyst –currency and energy, Anand Rathi Shares and Stock Brokers said.

"The gold flow into the Central Bank may take some time but the impact of ruble trade for gas purchase will be immediate," Joseph said. The State Bank of India in its report said that anchoring the currency to gold will help stabilize domestic inflation as well. "This move is expected to anchor the confidence in currency as sanctions led to steep rise in domestic demand for precious metals -- gold and palladium," it said.

Anna Koroleva, a senior Russian journalist told India Narrative that there is no panic within the country. "The Central Bank has huge gold and foreign exchange reserves, banks are working as usual. Now no one is withdrawing anything from ATMs, plastic cards are working," she said.

(The above story first appeared on LatestLY on Apr 05, 2022 01:47 PM IST. For more news and updates on politics, world, sports, entertainment and lifestyle, log on to our website latestly.com).