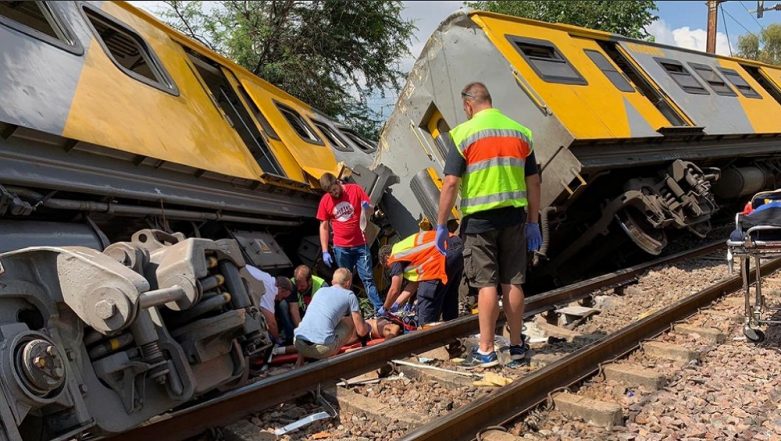 Two critically injured people were airlifted from the scene of the crash in Mountain View, northern Pretoria, spokesman Charles Mabaso told AFP. Another 300 people were hurt, with 82 sustaining serious injuries.

"The current fatalities stand at three, but it still might rise," said Mabaso.

When paramedics arrived on the scene, they found carriages from both trains tilting half off the track. "Numerous passengers were found either in the trains or found walking around on the scene," Russel Meiring, a spokesman for the ER24 emergency services, said in a statement.

Metrorail spokesperson Lillian Mofokeng said the two trains were both travelling on the same line and on the same track towards Pretoria from Mabopane when the collision happened. She said Metrorail was instituting an investigation into what had led to the collision.

South Africa’s President Cyril Ramaphosa sent his condolences to the crash victims. “Our thoughts are with those who lost their lives and their families. To the injured I would like to wish you all a speedy recovery,” Ramaphosa said. “I would like to also encourage emergency services team on the scene to do all in their powers to help those who are still trapped under the train.”

A year ago, in one of South Africa's worst rail disasters, a passenger train travelling from the southern city of Port Elizabeth to Johannesburg smashed into a lorry at a level crossing near Kroonstad in the central Free State province and burst into flames, killing 19 people and wounding 254.

In 2016-17, 495 people were killed on South Africa's railways according to the Railway Safety Regulator – an increase of eight percent on the previous year.  (With PTI and AFP inputs)