The Sudanese protesters continue to rail against the country’s military rulers who deposed Omar Al-Bashir from his three decade rule, as they believe the transitional military council is not serious about handing over power to a civilian government. 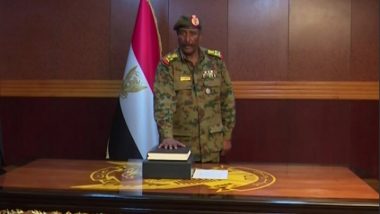 Mumbai, April 22: As the Sudanese protesters continue to rail against the country’s military rulers who deposed Omar Al-Bashir from his three decade rule, Lieutenant General Abdel Fattah al-Burhan, Sudan's interim leader  has promised to hand over power to the people.

"The transitional military council is complementary to the uprising and the revolution. The council is committed to handing over power to the people," Lieutenant General Abdel Fattah al-Burhan told state TV on Sunday. "We are not greedy at all to want to stay in power more than the time we agreed upon with the opposition parties. We are waiting for the opposition to submit their proposal."

But the Sudanese Professionals Association, a group which has spearheaded the four-month long protests against Bashir has accused the leaders in the military transitional council of reneging on their promise. "The military council is still not serious about handing power over to civilians. This [military] council is also representing part of the old regime," said Mohamed al-Amin Abdulaziz, the spokesman for the Sudanese Professionals Association (SPA). "We will continue our protests and we will escalate our protests. We will boycott talks with the military council," he said.

The army has replaced a few heads to appease the protesters, released political prisoners and invited the opposition parties to  name a civilian prime minister. But the army said it will hold on to control over the interior and defence ministries. It has also given a timeline of two years to hand over complete control of the Sudan government to a civilian rule which has infuriated protesters.

Sudan was ruled by Omar Al-Bashir with an iron fist for over three decades. The military and the intelligence arm were a powerful tool deployed by Bashir to quash protests and jail dissidents. Hence the Sudanese people are extremely distrustful of the current military transition council.

(The above story first appeared on LatestLY on Apr 22, 2019 05:01 AM IST. For more news and updates on politics, world, sports, entertainment and lifestyle, log on to our website latestly.com).