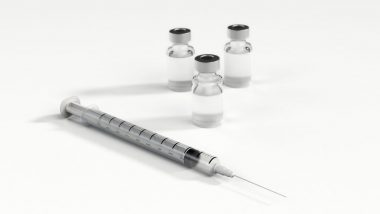 Saraburi, May 25: Thailand is conducting tests on macaque monkeys as it races to produce a cheaper, alternative coronavirus vaccine it hopes will be ready by 2021, a top researcher said Monday.

More than 100 candidate vaccines are currently in various stages of development around the world, at least eight of which are in clinical trials with humans, according to the World Health Organization.

Oxford University researchers are considered the frontrunners in the race, starting clinical trials last month on a version based on a different virus that causes infections in chimpanzees. Singapore and India Are Contributing to a COVID-19 Vaccine Race; Here's How.

Dr. Suchinda Malaivitjitnond, director of the National Primate Research Center of Thailand who oversaw Saturday's vaccine injections to an initial group of 13 monkeys, said she hoped a "Made in Thailand" vaccine would be cheaper than a European or American drug.

The testing phase on the macaque monkeys came after trials on mice were successful, researchers said.

They are working in collaboration with the University of Pennsylvania in the US using a new technology based on mRNA, a type of genetic material never before used to make a vaccine.

The process entails injecting a short sequence of viral genetic material to trigger an immune response by producing proteins acting against the virus.

Thailand was the first country outside of China to detect an infection in mid-January but has so far reported just over 3,000 cases and 57 deaths.

If the tests on the macaques go well, human trials should start in October, said Dr. Kiat Ruxrungtham, chair of the Chula Vaccine Research Center at Chulalongkorn University.

"Our dream is that low- and middle-income countries should not stay a buyer for our whole lives."

(The above story first appeared on LatestLY on May 25, 2020 03:14 PM IST. For more news and updates on politics, world, sports, entertainment and lifestyle, log on to our website latestly.com).