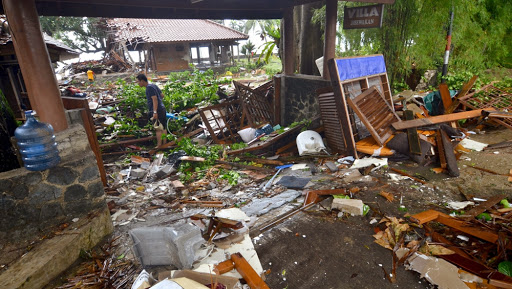 Sumatra, December 24: At least 281 people died, and 843 were injured in Indonesian coastline due to the tsunami which struck without warning on Saturday night. Also, more than two dozen people are reportedly missing. As per Indonesia's National Disaster Mitigation Agency, more tsunami was possible as long as the volcano remained active.

As per Indonesia's Meteorology, Climatology and Geological Agency (BMKG), the tsunami is believed to have been triggered when the Anak Krakatau volcano erupted in the Sunda Strait between the islands of Java and Sumatra at around 9:30 pm on Saturday. This prompted a series of underwater landslides, which created havoc in coastal regions of Java and Sumatra. Anak Krakatau volcano sits between the two islands. Indonesia Tsunami: Donald Trump Condoles Death of More Than 200 People.

With the agency warning that more tsunami waves are to going to hit in the coming days, the government of Indonesia have directed all the central agencies to save as many lives as possible. Stating the seriousness of the situation, Indonesia’s NDMA official Sutopo Purwo Nugroho said, as reported by CNN, “We are cautioning the people to remain cautious. Agencies are continuing to analyze the root cause ... the Krakatau volcano continues to erupt, which could potentially trigger another tsunami."

Expressing his condolences for the victims of Indonesia, Indian Prime Minister Narendra Modi took to Twitter and wrote, "Saddened by the loss of lives and destruction in Indonesia caused by the Tsunami after the eruption of a volcano. Condolences to the bereaved families and wishing the injured an early recovery. India is ready to assist our maritime neighbour and friend in relief work. @jokowi"

Saddened by the loss of lives and destruction in Indonesia caused by the Tsunami after the eruption of a volcano. Condolences to the bereaved families and wishing the injured an early recovery. India is ready to assist our maritime neighbour and friend in relief work. @jokowi

The eyewitnesses state that more deaths are to be reported soon as many are missing and the people are fleeing for the coastline with just the essential things in place. The initial report states that at least 558 houses were destroyed, while nine hotels, 60 restaurants and 350 boats were heavily damaged. Head of the mission in Indonesia for Doctors without Borders Daniel von Rège opine that more bodies and injured people were expected to arrive at hospitals in coming days.

Indonesia is one country which is considered as one of the most disaster-prone nations on earth due to its position straddling the so-called Pacific Ring of Fire – where tectonic plates collide. Earlier in 1883 too, Anak Krakatau killed more than 36,000 people.