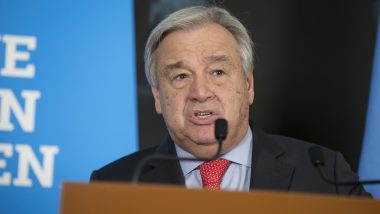 "We must get the world on track to achieve the goals of the Paris Agreement and avoid climate catastrophe," said Guterres, adding that "we must create a truly global coalition to commit to net-zero emissions by the middle of the century."

On the second priority, the top UN official said that "we need immediate actions to protect countries, communities and people from increasingly frequent and severe climate impacts."

"We need a breakthrough on adaptation and resilience, which means dramatically raising the level of investments," he added.

"The Covid-19 pandemic has shown the devastation that so-called non-traditional security threats can cause, on a global scale," he added.

Talking about the last priority area, Guterres said that "we need to deepen partnerships across and beyond the United Nations system."

"We must leverage and build on the strengths of different stakeholders, including this Council, the Peacebuilding Commission, international financial institutions, regional organizations, civil society, the private sector, academia and others," said the secretary-general.

(The above story first appeared on LatestLY on Feb 24, 2021 03:01 PM IST. For more news and updates on politics, world, sports, entertainment and lifestyle, log on to our website latestly.com).