"This is MY America - one that holds a virtual indoguration to celebrate the White House's first shelter dog. Thank you @delawarehumane for hosting such a wonderful event! We loved celebrating @MajorBiden and his big accomplishment," another user wrote on Twitter. 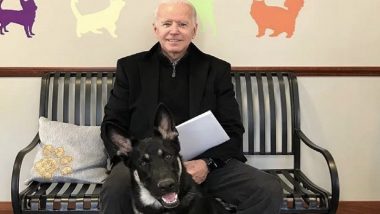 Major, a German Shephard, who was adopted by the Bidens in 2018 from the Delaware Humane Associaton would become the first dog from a shelter to live at the White House. Champ, Biden's second dog who is also a German Shepherd has been a member of the Biden family since 2008. Paw-Some! Joe Biden's German Shepherd Major Will Become First Rescue Dog in White House; Dog Lovers Celebrate 'DOTUS' by Posting Happy Pics of Their Own Pooches.

Biden's inauguration on January 20 would be the first time in four years that the White House would have dogs. Singer Josh Groban closed the ceremony with the rewrite of (How Much Is) That Doggie in the Window" by Patti Page, changing the lyrics to "I'm adopting that doggie in the window."

According to Entertainment Weekly, the 39-year-old singer-songwriter landed the gig after pleading to the former shelter dog's dad, who is to be inaugurated himself on January 20 as the 46th President of the United States. The event was hosted by 'Today's' Jill Martin. The proceeds of this virtual event will be benefitting shelter animals like Major.

Since it was a virtual event, many attended the event and raised as many as USD 100,000 for the nonprofit organisation, as per media reports. "Ready for #Indoguration," tweeted Naomi Biden, daughter of the President-elect.

"Major Biden was "indogurated" today, the first shelter animal to live in the WH. My two rescue boys and I send our congratulations and love," one of the users who attended the indoguration wrote on Twitter.

"This is MY America - one that holds a virtual indoguration to celebrate the White House's first shelter dog. Thank you @delawarehumane for hosting such a wonderful event! We loved celebrating @MajorBiden and his big accomplishment," another user wrote on Twitter.

CNN reported that Major is the first shelter dog in the White House, but he is not the first rescue dog. Before Major there was Yuki, a mixed breed pup abandoned by his owner at a gas station in Texas and rescued by President Lyndon B. Johnson's daughter Luci. Bill Clinton's family cat, Socks, was also a rescue.