"He (President Biden) described the implications and consequences if China provides material support to Russia as it conducts brutal attacks against Ukrainian cities and civilians," the White House said in a readout of the lengthy conversation between the two presidents. 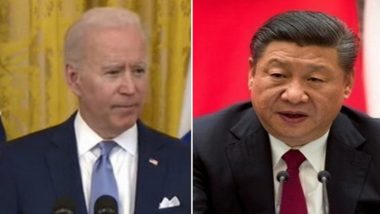 Washington/Beijing, March 19: US President Joe Biden warned his Chinese counterpart Xi Jinping that there would be "implications and consequences" for Beijing if it chose to provide direct "material support" to Russia amid its invasion of Ukraine and increasing attacks on civilians, the White House has said.

The 110-minute secure video call on Friday was the first conversation between the two leaders since the Russian invasion of Ukraine. The talks between Biden and Xi largely focused on Russia's invasion of Ukraine and the implications for the US.-China relationship and international order, a senior White House official told reporters.

"He (President Biden) described the implications and consequences if China provides material support to Russia as it conducts brutal attacks against Ukrainian cities and civilians," the White House said in a readout of the lengthy conversation between the two presidents. Russia Intensifies Attack on Ukraine, Using Hypersonic Weapons in Western Region.

Later, a senior Biden administration official refused to publicly detail what those consequences might be for Beijing, a close ally of Moscow. "I'm not going to, sort of, publicly lay out our options from here," the senior official said.

Ever since Russia launched a 'special military operation' in Ukraine on February 24, China has been treading a fine line, declining to condemn it as an invasion.

The call between the two presidents was about making sure there is a "direct, candid and detailed and very substantive conversation at the leader level," the senior administration official said.

"President Biden detailed our efforts to prevent and then respond to the invasion, including by imposing costs on Russia," the White House readout of the meeting said.

Biden underscored his support for a diplomatic resolution to the crisis. The two leaders also agreed on the importance of maintaining open lines of communication, to manage the competition between our two countries, it said.

Biden and Xi also tasked their teams to follow up on their conversation in the critical period ahead, the White House said.

At the same time, President Xi underscored that there have been and will continue to be differences between China and the US. What matters is to keep such differences under control. A steadily growing relationship is in the interest of both sides, the Chinese Foreign Ministry said in a statement in Beijing.

On the situation in Ukraine, President Biden expounded on the US position, and expressed readiness for communication with China to prevent the situation from exacerbating, it said. Ukrainian President Volodymyr Zelensky Urges ‘Meaningful Negotiations on Peace’ With Russia.

"China does not want to see the situation in Ukraine to come to this. China stands for peace and opposes war. This is embedded in China's history and culture," the statement quoted Xi as telling Biden. "China makes a conclusion independently based on the merits of each matter. China advocates upholding international law and universally recognised norms governing international relations," Xi said.

China adheres to the UN Charter and promotes the vision of common, comprehensive, cooperative and sustainable security. These are the major principles that underpin China's approach to the Ukraine crisis, Xi explained.

"All sides need to jointly support Russia and Ukraine in having dialogue and negotiation that will produce results and lead to peace. The US and NATO should also have dialogue with Russia to address the crux of the Ukraine crisis and ease the security concerns of both Russia and Ukraine," Xi said.

White House Press Secretary Jen Psaki said the vast majority of the nearly two hours was spent with the president outlining the views of the United States, its allies and partners on this crisis, including a detailed overview of efforts to prevent and then respond to the invasion, “how we got here, steps we've taken, where we've gone and why”.

A senior administration official told reporters that the conversation was direct.

“It was substantive and it was detailed. The two leaders spent the preponderance of their time discussing Russia's unprovoked and unjustified invasion of Ukraine, as well as the implications of the crisis for U.S.-China relations and the international order,” the official said.

“Biden shared with Xi a detailed review of how things have developed to this point, his assessment of the situation today, and President Biden underscored his support for a diplomatic resolution to the crisis,” the official said, adding that Biden described the US' assessment of Putin's actions and his miscalculations.

“He also described the unity of the United States and its allies and partners, the unprecedented coordination with our European, NATO, and Indo-Pacific partners, and the overwhelming global unity and condemnation of Russia's invasion of Ukraine, as well as the support for Ukraine,” said the official.

“Biden made clear the implication and consequences of China providing material support -- if China were to provide material support -- to Russia as it prosecutes its brutal war in Ukraine, not just for China's relationship with the United States but for the wider world,” the official said.

During the call, Biden stressed concerns that Russia is spreading disinformation about biological weapons in Ukraine as a pretext for a false-flag operation and underscored concerns about echoing such disinformation. US National Security Adviser Jake Sullivan had sent a similar message on Monday during a meeting with top Chinese diplomat Yang Jiechi in Rome, a senior administration official told reporters.  Russia-Ukraine War Latest Updates: Zelenskyy Says It is Time for Meaningful Security Talks; Dead Buildings Tower Over Uncollected Corpses in Mariupol.

The official declined comment on whether the US has information that China is providing or is open to providing Moscow with financial and military assistance but did say Sullivan spoke directly about concerns and the "potential implications and consequences of certain actions."

Meanwhile, Biden and Xi also discussed the Taiwan issue during their talks.

“President Xi raised Taiwan. President Biden reiterated that the United States remains committed to our one-China policy and is guided by the Taiwan Relations Act, the Three Joint Communiques, and the Six Assurances. And he underscored the importance of maintaining peace and stability across the Taiwan Strait,” the official said. China views Taiwan, a self-ruling island, as a rebel province that must be reunified with the mainland, even by force.