US Shocker: Man Has Sex With Friend's Dog in Public, Damages Church Property in Florida; Arrested

After the bestiality act and church vandalism, the suspect further went into the nearby neighborhood and destroyed a mailbox and tried to steal a car. 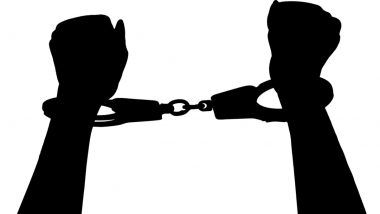 Florida, December 6: A shocking incident has come to the fore from here where a man has been accused of having sex with a friend's pet dog in public and destroying a church property in Clearwater. The man has been arrested after several witnesses saw him engaging in sexual activity with the canine. Sex Offender Creeps Into Women's Toilet in UK Mall, Makes Video of Teenage Girl; Jailed.

The accused, identified as Chad Mason (36), was taking the Goldendoodle out for a walk in the apartment complex, the report said. Moments later, he started getting into sexual activities with the pet dog in front of witnesses, including adults and a kid. When confronted, Mason fled. On his run, the accused destroyed a nativity scene at a nearby church. According to the reports, the cops were called at around 4:30 pm Sunday to the apartment complex on the 2600 block of McMullen Booth Road. Ireland: Man Stabs Sex Offender To Death, Gets Killed After Being Hit by Car While Trying To Flee in Monaghan.

The suspect further went into the nearby neighborhood and destroyed a mailbox and tried to steal a car. The accused is now lodged in a Pinellas County jail. He faces a variety of charges, which includes sexual activity involving animals, two counts of lewd or lascivious exhibition, two counts of exposure of sexual organs, criminal mischief, and criminal mischief to a place of worship.

(The above story first appeared on LatestLY on Dec 06, 2022 01:07 PM IST. For more news and updates on politics, world, sports, entertainment and lifestyle, log on to our website latestly.com).