China's GDP Shrinks 6.8% in First Quarter of 2020 Amid Coronavirus Pandemic, Worst Fall Since 1976

On a slowdown mode, China's economy grew by 6.1 per cent in 2019, the lowest annual growth rate in 29 years amid the bruising trade war with the US but it remained above the psychologically important mark of six per cent. The GDP in 2019 expanded to USD 14.38 trillion from USD13.1 trillion in 2018. 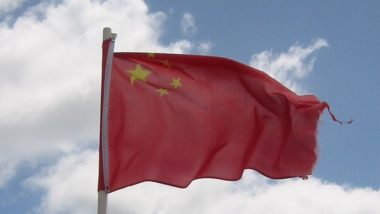 Beijing, April 17: China's GDP took the worst hit since the disastrous Cultural Revolution in 1976, plummeting by 6.8 per cent in the first quarter of 2020 as the country took unprecedented measures to fight the coronavirus pandemic that brought the world's second largest economy to a standstill.

China's gross domestic product stood at 20.65 trillion yuan (USD 2.91 trillion approx) in the first quarter of 2020 amid the COVID-19 impact, down 6.8 per cent year on year, China's National Bureau of Statistics (NBS) said on Friday.

The figure slightly rebounded from a drop of 20.5 per cent in the first two months, the NBS data said. Wuhan Coronavirus Death Toll Revised, Increased by 1290 casualties to 3,869, China Cites 'Misreporting' in Counting COVID-19 Positive Cases.

On a slowdown mode, China's economy grew by 6.1 per cent in 2019, the lowest annual growth rate in 29 years amid the bruising trade war with the US but it remained above the psychologically important mark of six per cent. The GDP in 2019 expanded to USD 14.38 trillion from USD13.1 trillion in 2018.

But the coronavirus which devastated China and the world ever since it broke out in Wuhan in December last year has dealt a major blow to the Chinese economy which was already in slowdown mode in the last few years due to steady shrinking of its exports markets.

While China had shut down the 56 million-strong central Hubei province and its capital Wuhan for over two months since January 23 to contain the virus for over two months, the entire country came to a standstill to prevent the COVID-19 from spreading across the world's most populous nation. The world's second-largest economy is now limping back to normal with factories resuming production all over.

Hong Kong-based South China Morning Post reported that the 6.8 per cent drop in the first quarter of 2020 is the first contraction since the end of Cultural Revolution spearheaded by the ruling Communist Party founder Chairman Mao Zedong in 1976 which had caused extensive damage to the fledgling Chinese economy then.

Its goal was to preserve Chinese Communism by purging remnants of capitalist and traditional elements from Chinese society, and to re-impose Mao as the dominant ideology in the Community Party of China. New data released by the NBS confirmed the slump due to the COVID-19 which was worse than predictions of minus 6.0 per cent from a survey of analysts, the Post report said. UK's GDP Can Fall by 25-20% in Second Quarter of 2020 Amid COVID-19 Pandemic, Says Chancellor Rishi Sunak.

The NBS data also showed that over the single month of March, the economy remained under huge pressure, with the industrial sectors, retail and fixed asset investment all shrinking again, following a collapse over the first two months of the year.

Releasing the figures to the media here, NBS however said the country's economic and social development witnessed overall stability in Q1. A breakdown of the data showed output of the service sector, which accounted for nearly 60 per cent of the total GDP, dropped by 5.2 per cent, while primary industry and the secondary industry saw a decline of 3.2 per cent and 9.6 per cent, respectively.

"The situation of epidemic control and prevention continued to improve with a basic interruption in epidemic transmission at home," the NBS said, adding that the resumption of work and production has accelerated and fundamental industries are growing steadily, state-run Xinhua news agency reported.

Friday's data showed China's job market improved slightly in March, with the surveyed unemployment rate in urban areas standing at 5.9 per cent, down 0.3 percentage points from the previous month, it said.

Retail sales in rural areas dropped 17.7 per cent year on year in Q1, while that in urban areas decreased 19.1 per cent, the Xinhua report said. The decline came as efforts to curb the spread of COVID-19 have kept most people across China indoors, as well as shops and restaurants shut during the past three months.

Revenues of the catering sector, one of the worst-hit industries, fell 44.3 per cent compared with the same period last year, said the NBS. Meanwhile, online sales stayed relatively stable as consumers turned to online services when staying indoors, falling 0.8 per cent year on year, it said.