Elon Musk had taken a brief hiatus from Twitter for 10 days, the SpaceX founder recently shared a family photo with the Pope, marking the end of his hiatus. 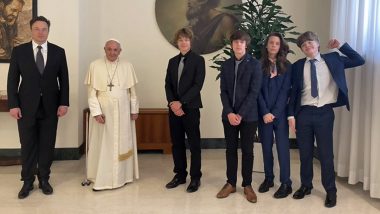 Tesla owner Elon Musk recently marked his Twitter return following a brief hiatus with a rare family photo. According to E! News, in the picture Musk, along with his sons Griffin Kai, Damian and Saxon, was seen posing with Pope Francis during a recent trip to Italy. "Honored to meet @Pontifex yesterday," he wrote. An Italian newspaper reported that the businessman and the pontiff had a 40-minute meeting at Casa Santa Marta in Vatican City. Elon talked about his ideas on improving the world and humanity, the outlet stated. Elon Musk Birthday: SpaceX CEO Crosses 100 Million Followers on Twitter.

Elon shares his four teenage sons with his first wife Justine Wilson. Griffin has a twin, who in April filed a request in a Los Angeles court to change her name to Vivian Jenna Wilson in accordance with her new gender identity. "I no longer live with or wish to be related to my biological father in any way, shape or form," she stated in her filing.

As per E! News, ten minutes before posting his photo with his four eldest sons, Elon shared a throwback pic of himself with his second ex-wife, actor Talulah Riley, dressed up while walking in the Italian city of Venice. He tweeted, "Talulah designed that dress herself and much of my 40th birthday party. She is a party genius."