Actor Eddie Mekka, who was a regular on the 1970s-80s sitcom Laverne and Shirley and also a Tony Award nominee, has died at the age of 69. 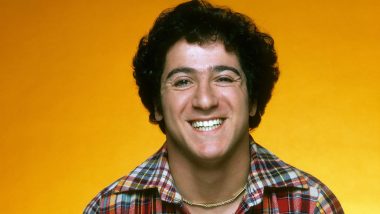 Actor Eddie Mekka, who was a regular on the 1970s-80s sitcom Laverne and Shirley and also a Tony Award nominee, has died at the age of 69. According to Fox News, his death was confirmed by his brother Warren Mekjian on Thursday. "Everybody was proud of Eddie's accomplishments on TV and he was a funny guy," Warren said, adding "Eddie always loved to dance and sing and makes jokes. He always tried to make people laugh and enjoy themselves." BTS V aka Kim Taehyung in Squid Game Guard Costume Has Got ARMY Happily Shouting 'Shoot Me Please'! Watch Sexy Tae Tae's Pics and Videos.

Warren wasn't sure of the cause of Eddie's death but confirmed he was alone at home in Newhall, California, on November 27 when police found him. Warren did reveal that six months ago, Eddie went to a hospital and was diagnosed with a blood clot. Born in Worcester, Massachusetts, Mekka headed the Worcester County Light Opera in his hometown in the early 1970s and made his Broadway debut in the 1975 rock opera 'The Lieutenant'. Money Heist Season 5 Volume 2 India Release Date, Time, Where To Watch - All You Need To Know About Alvaro Morte's Spanish Drama!.

Though the show closed after only nine performances, it earned four Tony nominations, including one for Mekka as best actor in a musical. He also earned a Drama Desk Award nod for his role. He landed the role of Carmine 'The Big Ragoo' Ragusa, Shirley's (Cindy Williams) boyfriend, on 'Laverne and Shirley' in 1976 and remained with the series throughout its eight-season run on ABC.

Mekka and Williams would work together again in the 2000s in a touring production of 'Grease' and a regional production of the play 'It Had to Be You'. He also worked with the other title star of 'Laverne & Shirley', Penny Marshall, in a brief role in Marshall's film 'A League of Their Own' as a guy Mae (Madonna) dances with at a bar. "I got to do a great jitterbug number with Madonna in A League of Their Own. And on Laverne & Shirley, because I love to sing Tony Bennett, we worked in a recurring bit where, whenever Laverne is mad at Carmine, all he has to do is sing the line from the Tony Bennett song, 'You know I'd go from rags to riches ...' and she forgives him," he recalled in a 2014 interview with a newspaper, as per The Hollywood Reporter.

Mekka had a role in the 2006 feature 'Dreamgirls' and made appearances on a number of TV series, including '24', 'ER', 'It's Always Sunny in Philadelphia' and daytime dramas The Young and the Restless' and 'The Bold and the Beautiful.