"Permission to Dance" is BTS's third single in the English language after "Dynamite" and "Butter." The band has been on a roll, from earning a Grammy nomination to returning to live concerts. ARMY is loving it. 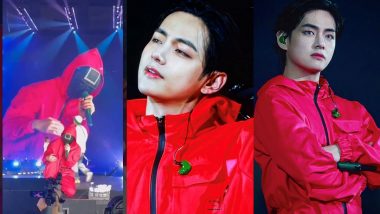 BTS' RM, V, Jin, Suga, J-Hope, Jimin and Jungkook held their third concert, Permission to Dance on Stage, in Los Angeles, and it was filled with memorable moments. But one member who made more buzz with his performance is V, aka Kim Taehyung. The 25-year-old known for his incredibly good looks added more charm to his charismatic personality dressing up as an infamous guard from Netflix's hit drama series, Squid Game. V took to the stage in a red jumpsuit and a black mask to resemble one of the Squid Game's guards. BLACKPINK’s Lisa Turns Into Squid Game’s ‘Red Light, Green Light’ Doll For Halloween 2021 (View Pics).

ARMY was seen having a blast seeing their favourite band perform live. But the excitement soared to the next level when V removed his mask and gave his priceless expressions. From tilting his head to giving a smirk to raising his brow, V proved why he is called the King of Expressions. Though, few fans pointed out singer-songwriter's eyes welled up, probably due to a hurt knee. Several clips showed V to have hurt his knee after he attempted to twirl the mic went awry. Nevertheless, the man truly left his fans speechless (or shouting their lungs out, your pick) with his smouldering hot performance.

Check Out The Pics and Clips Flooding Everyone's Timeline:

Kim Taehyung dropped his mic in the middle of the performance while flipping it with his squid game mask on 😭 pic.twitter.com/mHzFAmyL2D

The Most Gorgeous Guy

KIM TAEHYUNG IS THE MOST GORGEOUS HUMAN TO EXIST, even dressed as Squid game Taehyung pic.twitter.com/Z5cmWLeT99

My Purple Heart's About To Explode

KIM TAEHYUNG IN THAT SQUID GAME OUTFIT LOOKIBG SO GORGEOUS, ARE U KIDDING ME TAETAE?! pic.twitter.com/oVtflE6nLO

"Permission to Dance" is BTS's third single in the English language after "Dynamite" and "Butter." The band has been on a roll, from earning a Grammy nomination to returning to live concerts. ARMY is loving it.

(The above story first appeared on LatestLY on Dec 02, 2021 10:53 PM IST. For more news and updates on politics, world, sports, entertainment and lifestyle, log on to our website latestly.com).