Rajit Kapur on Aryan Khan's Drugs Case: It's Terrible That Being Shah Rukh Khan's Son Has Gone Against Him

Aryan Khan is currently lodged at the Arthur Road prison in the case of seizure of banned drugs aboard a cruise ship off the Mumbai coast earlier this month. 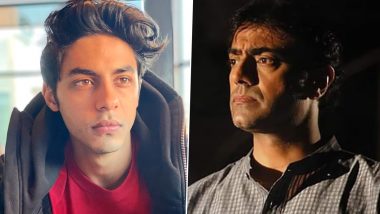 Actor Rajit Kapur has termed the spotlight on superstar Shah Rukh Khan's son Aryan Khan "unfortunate", saying that the case reiterates that people in the film industry are held under "excruciating scrutiny." Aryan is currently lodged at the Arthur Road prison in the case of seizure of banned drugs aboard a cruise ship off the Mumbai coast earlier this month. Neeru Bajwa’s Sister Rubina Bajwa Gets Engaged to Beau Gurbaksh Singh Chahal.

Kapur, known to star in films like "The Making of the Mahatma" and Basu Chatterjee's TV series "Byomkesh Bakshi", said the media trial of the Khan family is "extremely unfortunate." "Because people in the film industry are in the limelight, they are injected with this excruciating scrutiny. It is really unfair. This young man happens to be Shah Rukh Khan's son. Do you think if he was not Shah Rukh Khan's son, he would be made to go through this? The media making a whole 'tamasha' out of it? It would have gone unnoticed," Kapur told PTI. Mia Wasikowska Birthday: 7 Times She Made Some Jaw-Dropping Appearances On The Red Carpet (View Pics).

The 61-year-old cinema and theatre veteran said his heart goes out to Aryan, who he feels must be going through an intense range of emotions. "Of course, as a parent, I would be traumatised. But think about the young man. What is he going through, what will he think, 'My father is Shah Rukh Khan and he can't do anything.' So that means, today being Shah Rukh Khan's son is what has gone against him. It is terrible."

Aryan moved the High Court after a special court rejected his application for bail last week. The HC will hear his bail plea on October 26. In his appeal in the HC against the special court order, Aryan said the Narcotics Control Bureau's "interpretation and misinterpretation" of the WhatsApp chats collected from his mobile phone was "wrong and unjustified". He claimed no contraband was recovered from him after the NCB raided the ship.

Kapur said he feels for Aryan as the 23-year-old not only finds himself in a tricky spot but is also at the risk of being stigmatised. "This is like a stigma being attached... What is it that you are penalising him for, you are not even clear. Has he taken a knife and stabbed somebody? This is just a loop... having him in the prison, not giving him bail as if you are going to unearth some murder weapon. It has become some exorcised drama, I don't understand it anymore," the actor said.

Kapur will be next seen in the Eros Now anthology series "Aisa Waisa Pyaar".

The anthology explores different shades of love through four separate relationship stories criss-crossing each other. The series features Kapur as a loving husband to actor Sheeba Chaddha, who plays a woman suffering from dementia and is a huge Shah Rukh fan. "It is a simple, middle-aged love story which was all heart. She suffers from dementia. She is a great Shah Rukh Khan fan. So he is making all his efforts to reach out to her, to renew their memories through the images of Shah Rukh Khan, whom she loves," Kapur said.

The actor said he was drawn to the project after its writer and director Ashiish Patil narrated the segment to him on call. Kapur said he was not only touched by what the anthology was saying but also impressed by Patil's vision. "One thing that has changed drastically for me is that I need to know who I am working with. I don't mean my co-actors but the director. I need to connect with my director. Earlier perhaps it didn't matter, but today it is extremely important.

"I want to sit across the table with my director and understand what they want out of the project, what they want from me. If I feel I will be able to add to the colours of what their vision is (then I take up the project)," the actor, who has featured in films like "Raazi" and "Uri: The Surgical Strike" in the recent past, said. "Aisa Waisa Pyaar" also stars Saqib Saleem, Nidhi Singh, Prit Kamani, Adah Sharma and Ahsaas Channa. It will premiere on October 27 on Eros Now.