A temporary restraining order has been filed by Canadian rapper and songwriter Drake against a woman he claims has been stalking his Hidden Hills, California home for years. 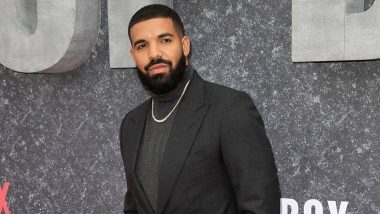 A temporary restraining order has been filed by Canadian rapper and songwriter Drake against a woman he claims has been stalking his Hidden Hills, California home for years. The documents obtained by Page Six suggests that the rapper has accused a 29-year-old woman of sending him threatening emails "wishing him dead" and saying he should "shoot [himself] and [his] son with a bullet." Julia Fox Gives Clarification on Past Romance Rumours With Drake and His Kanye West Feud.

In the filing, Larry Stein, his lawyer, has claimed that she sent him emails last month suggesting his famous client should "put a bullet through your head now bitch." Drake also alleged that the woman attempted to gain contact with him by filing a frivolous USD 4 billion lawsuit, as well as her own restraining order against the Toronto artist. The woman was arrested back in 2017 for trespassing on his property, according to the court documents. Rapper Drakeo the Ruler’s Family Files Wrongful Death Lawsuit Against Live Nation.

The Grammy winner added to the filing, "As a result of [her] harassment and obsession with me, I have suffered and continue to suffer emotional distress and am concerned for my safety and that of my family." Drake is requesting his alleged stalker stay at least 100 yards away from him, his family and his home. As per Page Six, previously too, the rapper has had to deal with another crazed fan, as a woman armed with a knife has attempted to trespass onto his Toronto estate.