Bigg Boss 13 fame, Shehnaaz Gill, who was recently seen in the Punjabi film Honsla Rakh, on Tuesday, took the internet by storm with her latest social media post. 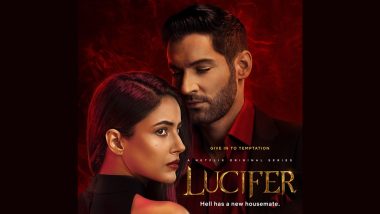 As soon as she shared it, fans got super-excited and started speculating that Shehnaaz would be making her digital debut with Netflix. Several of them expressed their excitement on Twitter which lead to Shehnaaz trending on the platform. One user wrote, "MY BABY IS COMING TO NETFLIX Weary face #ShehnaazGill QUEEN ily." Uncharted: Tom Holland, Mark Wahlberg's Live-Action Film to Release in India on Feb 18.

"What a big gift. Welcome back TO TWITTER Star #ShehnaazGill. Excited For THIS One," wrote another fan with a third one commenting, "What a surprise #ShehnaazGiIl" "Our queen SherniSparklesSparkles #ShehnaazGiIl In Web series that awesome is going to be super duper hit super excited for this #ShehnaazGiIl," shared one more fan.

However, it was not long before people realised that this poster was one among a slew of promotional crossover posters that Netflix India had shared on their social media handles, and not a new project. Another edited poster featured Sacred Games actor Nawazuddin Siddiqui in a 'Squid Game' setting. Sonu Sood was positioned alongside Winona Ryder in a poster of 'Stranger Things'.

Still, the support continued online for Shehnaaz, who has been through a tough phase since her rumoured boyfriend Sidharth Shukla's demise in September. The duo had grown closer to one another during their stint in 'Bigg Boss 13'. After the show ended, Shehnaaz and Sidharth also appeared together on reality shows such as Bigg Boss OTT and Dance Deewane 3, along with featuring in music videos of 'Bhula Dunga' and 'Shona Shona'.