According to The Hollywood Reporter, the 62-year-old daytime host is welcoming a limited amount of people for her tapings, starting with her Wednesday, October 28, episode of the show. 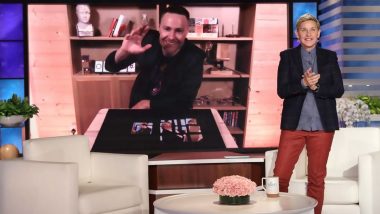 'The Ellen DeGeneres Show' is bringing back its live studio audience for the first time since the pandemic began. According to The Hollywood Reporter, the 62-year-old daytime host is welcoming a limited amount of people for her tapings, starting with her Wednesday, October 28, episode of the show. The talk show, which has a backlog of 4,000 previously scheduled fans, will select 40 lucky in-studio audience members out of the pool, who will have to follow strict health and safety protocols. The show will also continue with its 70 virtual audience members. The Ellen DeGeneres Show Executive Producer Rubbishes Rumours of the Talk Show Getting Shut As Workplace Investigation Continues

As per The Hollywood Reporter, the live studio audience will join just in time for the holidays. DeGeneres will continue with her 12 Days of Giveaways, beginning Monday, November 23, in which the host gives some of her in-studio audience and at-home fans some of her favourite gifts. Upcoming guests on the show include Melissa McCarthy, Khloe Kardashian, Jimmy Kimmel, Magic Johnson, Goldie Hawn and Kurt Russell, Usher and Vince Vaughn. Jennifer Aniston’s ‘Friends’ Reunion Talk on the Ellen DeGeneres Show Gets Twitter Excited

'The Ellen Show' isn't the first live series to bring back its studio audience. 'Saturday Night Live' returned with a live audience in early October. The NBC staple is even having to pay those audience members to fulfil New York City's COVID-19 guidelines.