According to People Magazine, On Thursday , The Real Housewives of Beverly Hills star shared a sweet photo of herself babysitting daughter Gigi Hadid's new-born girl on her Instagram Stories. 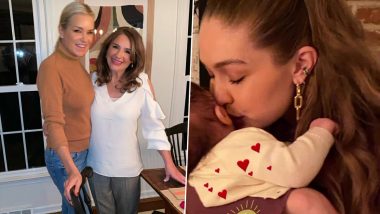 American-Dutch television personality Yolanda Hadid recently spent some quality time with her grandchild. According to People Magazine, On Thursday , The Real Housewives of Beverly Hills star shared a sweet photo of herself babysitting daughter Gigi Hadid's new-born girl on her Instagram Stories. Yolanda captioned the shot, "We spent the day while Mamma was away," which showed the pair bundled up outside with their backs turned toward to camera. Yolanda wore a black puffer, while the baby sported a white hat with a pink pom-pom. Gigi Hadid Shares Adorable Selfie with Her Daughter For the First Time, Says ‘She Burps Sunshine’

The proud grandmother also tagged the 25-year-old model Gigi in the post. That same day, Gigi revealed on her Instagram Stories that she was returning to work two months after welcoming her first child with boyfriend and singer Zayn Malik. Alongside a video of herself sitting on a black leather sofa, the supermodel wrote, "would say back 2 work BUT bein a mama is a job like no otherrrr." "BACK IN THE OFFICE," she added in the caption. Gigi Hadid and Zayn Malik Introduce their Baby Girl To The World on Halloween 2020 and She’s Dressed As Hulk (View Picture)

Gigi and the 27-year-old crooner Zayn, welcomed their first child together in September, sharing separate posts on social media about the arrival of their baby girl. The 'PILLOWTALK' singer was first to confirm her arrival with a Twitter message on September 23, writing, "Our baby girl is here, healthy & beautiful," alongside a photo of the baby holding onto his finger. "to try put into words how i am feeling right now would be an impossible task."

"The love i feel for this tiny human is beyond my understanding. Grateful to know her, proud to call her mine, & thankful for the life we will have together x," he added at the time. Gigi followed suit on Instagram, sharing another photo of Malik's hand resting on their daughter's blanket. "Our girl joined us earth-side this weekend and she's already changed our world. So in love," she wrote in the caption.