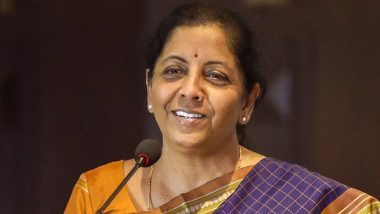 New Delhi, August 15: Finance Minister Nirmala Sitharaman has told tax officials that the responsibilities of the Income Tax Department have increased with the new faceless approach for appeals and assessments, sources said. Sitharaman said that the department is setting an example for the world in the use of technology for the delivery of better services to the taxpayers.

According to sources, she met IT officials on Friday and thanked them for their tireless efforts during the last two months to make the vision of the Prime Minister a reality by bringing in the faceless assessment system in a short time. She told them to work with the same zeal and dedication to make the faceless appeal system an equal success. PM Narendra Modi Says Govt Pursuing People-Friendly Tax Policies for Better Compliance.

Expressing her appreciation for the officers and staff of the Income Tax Department, she said that now the department has to serve the taxpayers with much higher standards to meet the commitments made in the taxpayers charter with the motto of "Transparent Taxation - Honouring The Honest". Prime Minister Narendra Modi on Thursday launched the platform 'Transparent Taxation', which rolled out a faceless assessment, appeal and rights' charter for taxpayers.

(The above story first appeared on LatestLY on Aug 15, 2020 05:06 PM IST. For more news and updates on politics, world, sports, entertainment and lifestyle, log on to our website latestly.com).