Grammy Awards 2021: BTS Performs Dynamite at the Grammys and Their Scintillating Performance Is Unmissable (Watch Video)

According to E! News, BTS marked a major musical milestone by performing their hit song Dynamite at the 2021 Grammys. 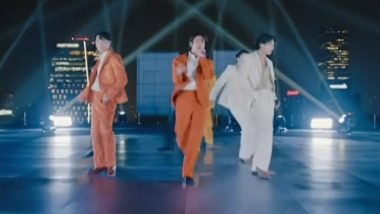 South Korean boy band BTS might not have won their first Grammy Award this year, but their stellar performance at the 2021 Grammy ceremony created history. According to E! News, BTS marked a major musical milestone by performing their hit song 'Dynamite' at the 2021 Grammys. The group wore different coloured suits as they moved through their pre-recorded performance. The K-Pop band really put the charm and talent that has amassed them millions of fans worldwide. Grammy Awards 2021: Taylor Swift Becomes First Woman to Win Album of the Year Honour Thrice.

The boy band comprises of seven swoon-worthy bandmates RM, Jin, Suga, J-Hope, Jimin, V, and Jungkook. They were nominated for the very first time this year at the Grammys, in the Best Pop Duo/Group Performance Category for the same song that they performed to 'Dynamite'. Ultimately, Lady Gaga and Ariana Grande took home the prize for their duet 'Rain On Me'. This led BTS fans to start the hashtag #Scammys, which soon trended on Twitter. Grammys 2021: Billie Eilish, Megan Thee Stallion, Beyonce – Meet the Best Dressed Stars From the Awards Night!

Previously, in a statement, BTS had told the official Grammys website of their high-energy single, "The inspiration for it all began from this: even in the midst of hardships, we must focus on what we can do. As for us, we found freedom and happiness in singing and dancing. This song goes to the ones who need encouragement. We hope people feel energized when listening to the song."

As per E! News, this was the third time that BTS appeared at the Grammys. Back in 2019, the group presented an award at the event, marking their first stateside award show ever. Despite being shut out of all categories at the event the following year, BTS returned to the Grammys, to make a special appearance during a performance of Lil Nas X's 'Old Town Road (Remix)'.

Though usually held at the Staples Center, this year's festivities will take place at the Los Angeles Convention Center.

The nominations for music's biggest night were announced on November 24, 2020. The legendary Beyonce topped the list of having the most nominations this year -- amassing nine nominations in the process. Queen Bey nabbed nominations for record of the year, song of the year and best R&B performance for her hit single 'Black Parade' along with a slew of other nominations.

So proud and this performance so Amazing 💜💜💜💜💜