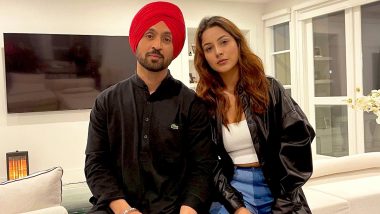 Actor Diljit Dosanjh on Friday concluded shooting for his next Punjabi film Honsla Rakh in Canada. The movie is directed by Amarjit Singh Saron, who previously helmed Punjabi films Jhalle and Kala Shah Kala. Rakesh Dhawan has penned the script. Dosanjh took to Instagram to share pictures and a video from the wrap up party, which was also shared by his co-star Sonam Bajwa on her Instagram Stories. Diljit Dosanjh, Sonam Bajwa Give a Fun Twist to Their Pawri Ho Ri Hai Video -WATCH.

The film, produced by Dosanjh, Daljit Thind and co-produced by Pawan Gill, is set to release countrywide on October 15.