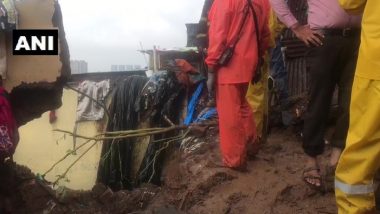 It further said that rescue operations are underway. In another incident in Mumbai on Sunday, a wall collapse due to a landslide in some shanties situated in Chembur's Bharat Nagar area killed 11 people, informed the National Disaster Response Force (NDRF). Mumbai Wall Collapse: 11 Killed After Wall Collapses on Shanties in Chembur’s Bharat Nagar.

In the rescue operation, 16 persons were safely taken out from the debris of the wall, said Mumbai's fire brigade team. The city has been receiving incessant rains that waterlogged several parts of Mumbai.

The rainwater even entered houses located in Hanuman Nagar, Kandivali East area of the city. An Orange alert for Mumbai was issued by the India Meteorological Department (IMD) on Saturday. The national weather forecast agency also predicted rains in the city for the next 24 hours.