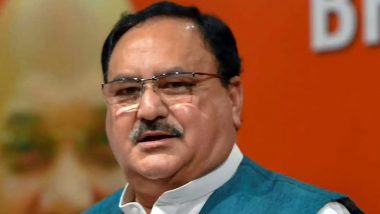 Nadda is on a two-day visit to BJP-ruled Gujarat from Tuesday ahead of the state Assembly elections due in December this year. Rahul Gandhi, Priyanka Gandhi Vadra Not Giving Enough Time to Congress, Says Himachal Pradesh PCC Chief Pratibha Singh.

He will also address professors at Tagore Hall in Ahmedabad and talk about BJP's ideology, it said. On Tuesday, Nadda addressed a gathering of the Gujarat BJP's elected representatives in local urban and panchayat bodies in Rajkot city. He had asked party cadres in the state not to worry about the forthcoming Assembly elections, stating that their party is the only one which has an ideology.