However, a member of the cemetery's committee told them that the deceased's ashes could be buried there, citing the COVID-19 outbreak and the facility being located close to some residential premises, he said. 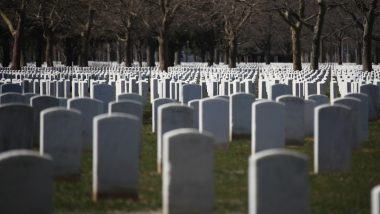 Nagpur, August 10: A 74-year-old man, who died of COVID-19, was buried on municipal land here after a local Christian cemetery said it would only allow burial of his ashes after cremation.

The victim, who was undergoing treatment at a government hospital here in Maharashtra since August 1, died on Sunday morning. He was a member of the local Protestant church, his son told PTI.

The family approached the Jaripatka Christian Cemetery for burial. However, a member of the cemetery's committee told them that the deceased's ashes could be buried there, citing the COVID-19 outbreak and the facility being located close to some residential premises, he said. Coronavirus in India: Live Map.

"We wanted a regular traditional burial without cremation (burning of body) for which we were not getting permission. They were reluctant for burial of a COVID-19 patient in the Jaripatka cemetery," he said.

It was getting late and the Nagpur Municipal Corporation (NMC) authorities were waiting for the family's approval for the last rites of the deceased.

"So, we had to take a decision and they (NMC) were ready give us a burial place at their Mankapur crematorium premises. My father was buried there as per the Christian tradition," he said. Jaripatka Christian Cemetery president Ganesh Barve told PTI that they had received a call from the deceased's family for his burial.

"The cemetery is situated in a residential locality and there was lack of space there due the rains. There was also a problem of digging the grave due to rains. We referred to them instances in which some COVID-19 patients were cremated at ghats and their ashes were buried in the cemetery as per Christian rituals," he said.

"We also gave them an option for burial at Bhandewadi cemetery, which is located in a little remote area. However, we did not get a call back from them," said Barve. India's COVID-19 Recoveries Cross 1.5 Million, Infection Remains Concentrated in 10 States, Says Health Ministry.

When contacted, a civic official said the Jaripatka cemetery was muddy and there was problem of digging the grave there. Besides, the family was not getting permission for burial of the body at the cemetery. "We provided them an alternative land for burial to which the family agreed. Graves of people from other faiths are also there,"he said.