Noting that none among the three appeared in the last couple of hearings, a division bench of Justice Siddharth Mridul and Justice Rajnish Bhatnagar issued the fresh notice to the respondents. 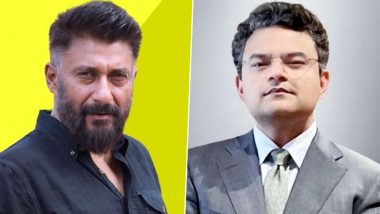 The case is in connection with their remarks against high court Justice S. Muralidhar who had quashed rights activist Gautam Navlakha's house arrest order and transit remand in the Bhima Koregaon case in 2018.

Noting that none among the three appeared in the last couple of hearings, a division bench of Justice Siddharth Mridul and Justice Rajnish Bhatnagar issued the fresh notice to the respondents. Bihar: 'Marriage of Gudda and Gudiya', Say Villagers After 36-Inch Tall Groom Ties Knot With 34-Inch Bride in Bhagalpur.

During the course of the hearing, amicus curiae Arvind Nigam apprised the court that there are still people who have not even been served the notice. Accordingly, issuing notices to several others in connection with the case, the bench slated the hearing for September 19.

As per the case, the suo motu contempt proceedings were initiated against the respondents following RSS ideologue S. Gurumurthy's tweets alleging bias by Justice Muralidhar.In his tweet, he retweeted the link from a blog called 'Drishtikone' which had an article titled 'Why has Delhi High Court Justice Muralidhar's relationship with Gautam Navlakha not been disclosed?'

The article alleged that the Delhi High Court judge's wife was a close friend of Navlakha and said Muralidhar's reason for quashing the house arrest order was flimsy.

The court took notice of the tweet and the article after Advocate Rajshekhar Rao wrote a letter to then Chief Justice Rajendra Menon, alleging that the article and Gurumurthy's retweet was a deliberate attempt to attack a sitting High Court judge.

Gurumurthy was later dropped from the case after an apology but others including Agnihotri and Ranganathan are still the respondents.

Earlier also, a contempt notice was sent to Vivek Agnihotri over his tweets that stated that Gautam Navlakha was given leniency over the fact that he was a friend of the judge's wife.

(The above story first appeared on LatestLY on May 04, 2022 10:44 PM IST. For more news and updates on politics, world, sports, entertainment and lifestyle, log on to our website latestly.com).