Union law minister Kiren Rijiju on Monday said that the border dispute between Assam and Mizoram was exacerbated by forces from outside the country with lots of elements from abroad interfering by making inciting statements. 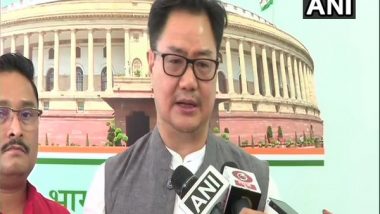 New Delhi [India], August 2 (ANI): Union law minister Kiren Rijiju on Monday said that the border dispute between Assam and Mizoram was exacerbated by forces from outside the country with lots of elements from abroad interfering by making inciting statements.

BJP MPs from all Northeastern states today met Prime Minister Narendra Modi and submitted a memorandum to him on various issues pertaining to the region, including violence on the Assam-Mizoram border, and also expressed their disapproval about attempts by a section of politicians led by Congress for indulging in one-upmanship on the issue and of making proactive statements.

Rijiju, who is the BJP MP from Arunachal Pradesh, said that Congress and other political parties were adding fuel to the fire.

Speaking to ANI, Rijiju said, "In our memorandum to PM over the Assam-Mizoram border issue, we have mentioned that the border dispute is old and both the state governments are working towards resolving it. But Congress and other political parties are adding fuel to the fire."

"They are giving provocative statements and inciting people. It has come to be known that there has been interference from outside the country through social media over this issue. We condemn this," Rijiju added.

Assam BJP General Secretary Dilip Saikia said, "We condemn Congress' attempts to create a sentimental environment over violence at the Assam-Mizoram border. In their 50 years of governance in the northeast, they couldn't find a solution for this issue but now they are accusing us."

"NDA Government is committed to resolving the inter-state border issues as early as possible with discussion with all the northeastern states. PM is very keen and he has assured us that he will take up the issue in a positive way and resolve it within the stipulated time frame," he added.

Meanwhile, Mizoram Governor K Hari Babu also met with Prime Minister Modi earlier on Monday and stated that the Union Home Ministry is trying to find a solution to the border row. "Both chief ministers (of Assam and Mizoram) have committed that peace will be restored," he said.

On Sunday, Assam Chief Minister Himanta Biswa Sarma on Monday said he has directed state police to withdraw FIR against Rajya Sabha MP K Vanlalvena as a "goodwill gesture" after the July 26 border clash with Mizoram. Sarma called for a dialogue to resolve the border dispute, saying that his government's main focus is on "keeping the spirit of the North-East alive".

"Our main focus is on keeping the spirit of North-East alive. What happened along the Assam-Mizoram border is unacceptable to people of both states. Mizoram CM had promised to call me post his quarantine. Border disputes can only be resolved through discussion," Sarma had tweeted.

Mizoram Chief Minister Zoramthanga also tweeted that as per telephonic discussion with the Union home minister and Assam chief minister they have agreed to resolve the Mizoram-Assam border issue amicably through "meaningful dialogue". He also urged the people of Mizoram to refrain from posting "sensitive messages and make judicious use of social media platform." (ANI)