A 36-year-old man has been arrested for allegedly duping over Rs 4 lakh from a senior citizen in Delhi's Rani Bagh by promising to cast him in a movie under a renowned production company. 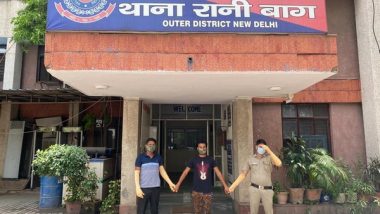 New Delhi [India], June 11 (ANI): A 36-year-old man has been arrested for allegedly duping over Rs 4 lakh from a senior citizen in Delhi's Rani Bagh by promising to cast him in a movie under a renowned production company.

Singh said that after retiring in 2012 from the Indian Railways where he worked as a technician, he started exploring to further his hobby of acting and was on the look out for a role as a junior artist. The senior citizen said that he received a post on Facebook in February 2020, regarding a casting call in Balaji Telefilm where Mishra, called him pretending to be Karan Sharma, the casting manager for the production company.

Mishra told Singh that his resume had been selected and that he needed an Artist Card for a further audition. He thus asked Singh to transfer a sum of Rs 16000 to his account. Subsequently over a period of time, Singh was made to transfer additional sums of money on different pretexts.

After some time when Singh had given Mishra a total of Rs 4,70,900 over a period of time, the latter soon stopped responding to the senior citizen's calls, Delhi Police said.

During an investigation, the team of Rani Bagh Police Station identified Mishra and apprehended him from Madanpur Khadar area in the city.

On questioning, Mishra revealed that he was duped in a similar fashion in the year 2016 by some cons in Mumbai, after which he created a Facebook profile under the name 'Deepu Pandit' and posted about 30-40 Bhojpuri song videos.

Delhi Police said that Mishra admitted to have cheated a few other people in the same way and police are in the process of gathering details.

The accused Mishra had transferred the money he had got from the frauds to the accounts of his family members, and to make payments for different purchases through an e-wallet. (ANI)