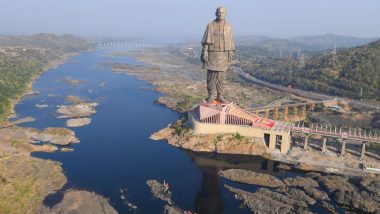 Ahmedabad, October 13: The Gujarat government will reopen the Statue of Unity in Narmada district from October 17, with several precautionary measures in place to prevent the spread of coronavirus, an official said on Tuesday. The 182-metre tall statue of Sardar Vallabhbhai Patel has remained closed for visitors for over seven months in light of the pandemic.

At least 2,500 tourists will be permitted every day, of which only 500 will be allowed up to the viewing gallery to maintain social distancing and prevent the viral spread, the release issued by the government stated. There will be five slots of two hours each for entry every day and only 500 visitors will be allowed to enter in each slot, it was stated.

Entry will be allowed only in the slot for which tickets have been purchased.

The government has also made it clear that tickets will be available on the authorised website www.soutickets.in and no tickets will be issued physically at the site. Masks are mandatory for all tourists and each visitor should stand at designated spots within the premises of the monument, the release stated.