Two terrorists, including a top commander of the proscribed terror outfit Lashkar-e-Taiba, were killed in an encounter with security forces in Jammu and Kashmir's Shopian, an official said on Monday. 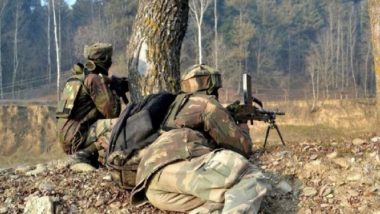 Shopian, July 19: Two terrorists, including a top commander of the proscribed terror outfit Lashkar-e-Taiba, were killed in an encounter with security forces in Jammu and Kashmir's Shopian, an official said on Monday.

According to Inspector General of Police (IGP) Kashmir Vijay Kumar, the LeT commander has been identified as Ishfaq Dar alias Abu Akram. He was active in the Valley since 2017.  Jammu & Kashmir | An Encounter Breaks out at Alamdar Colony, Danmar Area of Srinagar.

As per Kashmir Zone Police, incriminating materials including arms and ammunition were recovered from the site of the encounter and a search operation is currently underway.

"Incriminating materials including arms and ammunition recovered on. Search going on. Further details shall follow," said police in a tweet.

The encounter between the security forces and terrorists broke out in the Sadiq Khan area of Shopian on Sunday.

This comes after two local terrorists belonging to Lashkar-e-Taiba were killed in an encounter with security forces in Srinagar on Friday, who were involved in all the three incidents that took place in Srinagar in June this year.

Speaking to ANI, Kumar had said, "This year three encounters broke out in Srinagar. We all know that three incidents took place in Srinagar. In one incident, a police inspector was killed. In another incident, a mobile shop owner was attacked and killed. And then there was a grenade attack in which three civilians were killed and one was injured."

"These two terrorists were involved in all these three incidents. We were tracking them. When this information was confirmed yesterday, the CRPF launched a cordon operation. We appealed to them to surrender but they refused after which an encounter started and both were killed," the Kashmir IGP had said.

Kumar had also said that a total of 78 terrorists have been neutralised in the valley so far this year.