Both the sentences are being served consecutively. 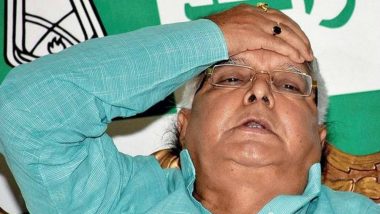 Ranchi, December 12: The physician of jailed RJD chief Lalu Prasad Yadav, Dr Umesh Prasad on Saturday said that the latter's kidney is functioning at 25 per cent and the situation can deteriorate at any time in future. Dr Prasad has updated the authorities of Rajendra Institute of Medical Sciences (RIMS), where Yadav is admitted, in writing about this situation.

"I have said earlier also that it is true that Yadav's kidney is functioning at 25 per cent. And this situation is alarming from this logic that his kidney functioning can deteriorate anytime. It is difficult to predict exactly when," Dr Prasad told ANI.

"The rate at which his disease is getting worse and since he has diabetes for the last 20 years, his end organ is damaging in an escalating manner. So, the situation is alarming for the patient's health. The higher authorities of Rajendra Institute of Medical Sciences (RIMS) have been informed in writing about Yadav's health that emergency situation can arise at any time," he added. Also Read | Lalu Prasad Yadav Health Update: RJD Leader’s Kidney Function Can Deteriorate Anytime, Says RIMS Doctor.

Dr Prasad also said, in his opinion, there is no need to transfer Yadav to any other medical facility as organ damage due to diabetes is irreversible and no medicine can cure it.

"The court or the government has to decide on whether he needs to be taken somewhere else for treatment. In my opinion, there will not be any major impact on his health if he is taken outside for treatment. This is because the damage in body organs due to diabetes is irreversible. There is no medicine which will make the kidney function at 100 per cent from 25 per cent.

Otherwise, there will be no need for dialysis or kidney transplant," he said.

"We have taken a decision that we will consult the resident nephrologist and decide on the further course of treatment of Lalu Prasad Yadav," he added.

Meanwhile, on Friday, the Jharkhand High Court deferred Yadav's bail plea hearing in the fodder scam case to January 22, 2021 after considering a request made by Yadav's lawyer.

The RJD leader was admitted to RIMS on August 30, 2018, after he surrendered at Birsa Munda Central Jail on Jharkhand court's orders in the fodder scam. Yadav had in October secured bail in connection with the Chaibasa treasury case related to the fodder scam. However, he is yet to secure bail in the Dumka treasury case. Farmer Unions vs Centre Deadlock: Haryana CM Dushyant Chautala Hopeful of Breakthrough in 'Next 28-40 Hours'.

Yadav, who had been in prison since December 2017, was sentenced to seven years imprisonment in 2018 under the Indian Penal Code (IPC) and seven years under the Prevention of Corruption Act in connection with the fodder scam case. Both the sentences are being served consecutively.

The case pertains to the fraudulent withdrawal of Rs 3.5 crores from the Dumka treasury by Animal Husbandry Department officials between 1991 and 1996 when Yadav served as the State's Chief Minister.