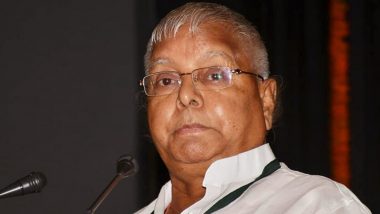 Ranchi, December 12: The kidney function of former Bihar Chief Minister and RJD President Lalu Prasad Yadav can get worse anytime, Dr Umesh Prasad of Rajendra Institute of Medical Sciences (RIMS) in Ranchi said on Saturday. Lalu Prasad Yadav, who was convicted in fodder scam cases, has been undergoing treatment in the RIMS for multiple ailments. Jharkhand HC Seeks Report on Shifting of Lalu to Hosp Director's Bungalow from Ward and Back.

"Lalu Prasad Yadav's kidney function can deteriorate anytime. It is difficult to predict. It is obviously alarming and I have given it in writing to authorities," Dr Umesh Prasad, who is treating the RJD supremo, told news agency ANI. Prasad has been behind bars since December, 2017 in cases related to the fodder scam in the 1990s in undivided Bihar, when money was fraudulently withdrawn from treasuries in the name of supplying fodder to animals. Lalu Prasad Yadav’s Son Tej Pratap Allegedly Offered Hotel Room in Ranchi Amid COVID-19, Police Book Owner And Manager.

Lalu Prasad Yadav's kidney function can deteriorate any time. It's difficult to predict. It is obviously alarming & I've given it in writing to authorities: Dr Umesh Prasad, doctor treating RJD chief Lalu Yadav who is admitted at Rajendra Institute of Medical Sciences, Ranchi pic.twitter.com/6M5GNKSAFW

The RJD leader is currently in judicial custody in one fodder scam case. He has secured bail in other cases related to the scam. He was previously lodged at the Birsa Munda jail located at Hotwar. However, for treatment of various ailments, Lalu Yadav has been admitted in the paying ward of the RIMS. He was briefly shifted to the director's bungalow after a few security guards and nursing staff were found coronavirus positive.

(The above story first appeared on LatestLY on Dec 12, 2020 05:11 PM IST. For more news and updates on politics, world, sports, entertainment and lifestyle, log on to our website latestly.com).