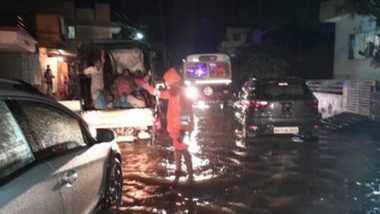 "Landslide reported in Kalai village. Till now, there is no information on how many people have been affected. We have informed the National Disaster Response Force team. The authorities are finding it difficult to reach the location due to waterlogging," said District Collector Raigad.

Meanwhile, Raigad Guardian Minister Aditi Tatkare informed that the Maharashtra government has sought assistance from the Central government and Army to rescue the people trapped in Mahad.

"NDRF team is having trouble reaching the affected villages as roads are submerged underwater," the official said.

A team of NDRF evacuate and shift locals of Chikhli village to safer places, due to an increase in the water level in the area as a result of heavy rainfall.

Earlier on Thursday, Maharashtra Chief Minister Uddhav Thackeray held an emergency meeting to take stock of the flood situation in Ratnagiri and Raigad districts in the state, caused by torrential rains that have battered the region over the past 24 hours.Thackrey directed the Disaster Management units and departments concerned to stay vigilant and start rescue operations immediately, informed the Chief Minister's office.Two teams of the NDRF were rushed to Ratnagiri's Khed and Chiplun areas to tackle critical situation due to high tide and heavy rain. Two more teams have been mobilised for rescue operations one each for Khed in Ratnagiri and for Mahad in Raigad, from Pune headquarters.The national forecasting agency India Meteorological Department (IMD) has issued red and orange alerts for several regions in the state that are set to receive heavy rainfall in the next three days. (ANI)