Kharge, after taking charge of the Congress party as President, has started devising strategies on three key points that include strengthening the organization, connecting with party workers, and working on election areas and Bharat Jodo Yatra, party sources told ANI. 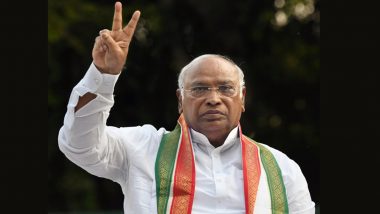 New Delhi, November 24: Newly elected Congress Party President Mallikarjun Kharge has intensified his efforts to strengthen the party ahead of the 2024 Lok Sabha polls and is likely to start a tour of states including Gujarat.

"His (Kharge) visits to different states are also likely to focus on the three key points," they said. Party sources close to Kharge said that the Congress chief is going to start his tour from Gujarat in view of the upcoming assembly elections in the state.

The Gujarat assembly elections are scheduled to be held in two phases on December 1 and December 5. Voting for 89 assembly seats will take place in the first phase, while for the remaining 93 assembly seats voting will be held in the second phase of polling. Lok Sabha Elections 2024: BJP Resets Target, To Focus on One Lakh Weak Booths.

Congress chief Kharge is expected to visit Gujarat before the first phase of elections. He would also hold public rallies before the second phase of polling, said sources. Congress leader Rahul Gandhi is also expected to join and campaign for the party in Gujarat in the second phase of polling. "His (Rahul Gandhi) tour will however depend on a break in 'Bharat Jodo Yatra'," they said.

In addition to this, Kharge has also started holding meetings with party leaders in Himachal Pradesh to work on new strategies accordingly after the results are declared.

As per information, Kharge's intentions to ensure the party's best performance in the upcoming Lok Sabha elections 2024 are clear, and he is leaving no stone unturned to win maximum seats in the polls. He is holding meetings at his residence office so that Congress workers and leaders feel connected with the party, sources said.