Pranab Mukherjee Dies at 84: RSS Chief Mohan Bhagwat Says ‘He Was Like Guide for Us, Didn’t Believe in Political Untouchability’

Mukherjee, 84, passed away in an army hospital here. 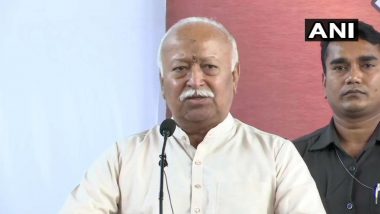 Mukherjee didn't practice political untouchability and was respected by all parties, the statement said. "He was a guide for Sangh and was affectionate towards the organisation and his passing away is irreparable loss to the RSS," it added. Also Read | Pranab Mukherjee Dies At 84: Union Govt Announces 7-Day State Mourning Throughout India From August 31 to September 6.

Mukherjee was attacked by the Congress itself in June 2018 for attending an event of Rashtriya Swayamsewak Sangh the ideological mentor of the ruling BJP. But later, the Congress was all appreciation after Mukherjee in his speech emphasised that the soul of India is pluralism, tolerance and inclusion.

In his speech, Mukherjee had warned that any attempt to define India through "religion, hatred, dogmas and intolerance" will dilute our existence and said public discourses must be freed of all forms of violence.

Mukherjee's message to hundreds of 'pracharaks' and top-brass of the RSS, which is often described as a Hindu right-wing organisation, was described as a 'mirror of truth to the RSS' by the Congress, whose several leaders had earlier been critical of his decision to attend the event here at the Sangh headquarters. Mukherjee, 84, passed away in an army hospital here.