The incident occurred at Lokhandi Chawl in Shivaji Nagar area of Dahisar east around 6.36 pm, they said. 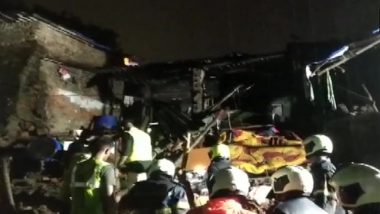 On being alerted, the personnel of fire brigade and other agencies rushed to the spot, the Brihanmumbai Municipal Corporation (BMC) officials said.

One person was rescued from the spot and rushed to Shatabdi Hospital in Kandivali, a fire brigade official said. " However, doctors at the hospital declared that person, 26-year-old Pradyumna Saroj, dead before admission," he said. Further details about the incident are awaited.

This is the second incident of house collapse in Mumbai in the past 24 hours and third this week. At least 12 people, including eight children, were killed and seven others injured after two floors of a three-storey residential building collapsed on an adjoining single-storey house in Malwani in suburban Mumbai late on Wednesday night.