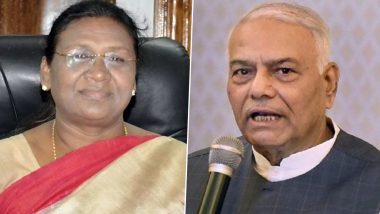 New Delhi, July 2: NDA nominee Droupadi Murmu and joint opposition candidate Yashwant Sinha are the only two left in the race for the president's office after the last day for the withdrawal of nomination ended on Saturday.

Rajya Sabha Secretary General P C Mody who is also the Returning Officer for the July 18 polls said 115 nomination papers by 94 individuals were received till June 29, of which 107 were rejected for not meeting the required criteria.

The nomination papers of Murmu and Sinha, four sets each, were found to fulfil all the requirements of a valid nomination and were accepted, he said.

The Rajya Sabha Secretariat said in a statement that the voting will take place between 10 AM and 5 PM in Room Number 63 of the Parliament House, and in notified rooms in state assemblies. Presidential Elections 2022: Telangana CM KCR Urges All Parliamentarians To Compare Both Candidates and Elect Yashwant Sinha.

With several regional parties including the BJD, BSP and SAD extending their support to Murmu, the numbers are stacked in favour of the NDA nominee who is expected to win the polls comfortably.

MPs normally exercise their vote in the Parliament House, while members of state legislative assemblies, including the MLAs of the NCT of Delhi and the Union Territory of Puducherry, in their respective capitals at the places notified by the Election Commission of India.