The case against them was filed under Indian Penal Code (IPC) sections 295 (defiling place of worship with intent to insult the religion of any class) and 186 (voluntarily obstructing a public servant in the discharge of his public functions), he added. 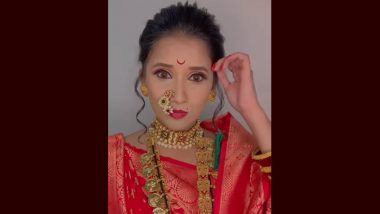 Pune, May 21: Police have registered a case against a female Marathi artiste and three others after a video showed her performing dance on a Lavani number in the premises of Lal Mahal here, where Chhatrapati Shivaji Maharaj had spent several years of his early life, an official said on Saturday.

Some political outfits, including the ruling NCP, condemned the dance video, which prompted the dancer, Vaishnavi Patil, to tender an apology. The case against Patil and three others was registered at Faraskhana police station on Friday night based on a complaint lodged by the security guard of the Lal Mahal, the official said.

Lal Mahal is a red-coloured building located in the heart of the city, where Maratha warrior king Shivaji Maharaj, a revered figure, spent several years of his childhood. Dancer Vaishnavi Patil, 2 Others Booked by Pune Police For Shooting Lavani Video Inside Lal Mahal.

"Vaishnavi Patil performed Lavani dance at the Lal Mahal on Monday and people accompanying her shot a video of the act, which they later posted on social media. As mentioned in his complaint, the security guard, who was on duty there at that time, asked them not to perform dance and shoot in the premises of the monument," the police official said.

The case against them was filed under Indian Penal Code (IPC) sections 295 (defiling place of worship with intent to insult the religion of any class) and 186 (voluntarily obstructing a public servant in the discharge of his public functions), he added.

Lavani, a popular folk dance of Maharashtra, is known for its sensuous moves.

In a tweet, he said, "Shivaji Maharaj's Lal Mahal is not a place for shooting dance videos. This should not happen again. If anyone has done so (shot dance videos there), do not upload them."

NCP's city unit president Prashant Jagtap announced that a protest will be held outside the Lal Mahal on Saturday afternoon to denounce the video.

The Pune unit of Sambhaji Brigade, a hardline Maratha outfit, also condemned the video. After her video kicked up a row, Patil, a winner of a dance show, on Friday apologised for her act.