Ahead of Uttarakhand Assembly polls, Aam Aadmi Party (AAP) National Convenor Arvind Kejriwal on Monday promised Rs 1 crore ex gratia to families of those security personnel of the state who die in action. 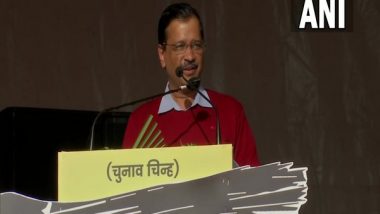 "If AAP government is formed in Uttarakhand, then if any police personnel, soldier, defence force or paramilitary force personnel is killed in any operation, then an ex gratia amount of Rs 1 crore will be given to their family," Kejriwal said while addressing party's Nav Parivartan Yatra at Parade Ground in Dehradun.

He further said that Colonel (retired) Ajay Kothiyal, who is the party's chief ministerial face in upcoming elections, will himself go and meet the families of the deceased personnel to hand over the money to them.

Kejriwal also promised a government job to all ex-servicemen of the defence after their retirement if the party comes to power.

"All ex-servicemen after retirement will be given a job in the Uttarakhand government," the AAP supremo said.

He further remarked that all families in Uttarakhand or someone in their relation has an ex-servicemen or a soldier.

Kejriwal had earlier promised to provide 300 units of free electricity to the people of the state if his party comes to power.

"If I give 300 units of free electricity to Uttarakhand people, then they get irritated," Kejriwal remarked.

Assembly polls in Uttarakhand and four other states are due this year.