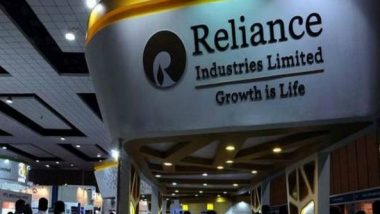 New Delhi, October 25: Billionaire Mukesh Ambani-led Reliance Industries is rolling back salary cuts for the employees of its hydrocarbons division and is also giving out performance bonus that had been deferred after business was hit by coronavirus lockdown. Also Read | Upcoming LG Q52 Smartphone Images & Specifications Tipped Before Launch.

The firm is also offering an advance 30 per cent of the variable pay from the next year's salary to its lakh-plus employees as a goodwill gesture for working during the pandemic, two persons familiar with the matter said. Also Read | Dusshera 2020: OnePlus 8T 5G Smartphone Available With 10 Percent Discount on Via Amazon India.

Reliance in April had cut the salary of employees of its hydrocarbons division by 10 per cent to 50 per cent with the firm's chairman and richest Indian Mukesh Ambani agreeing to forgo all his remuneration.

Also, the oil-to-technology conglomerate had deferred annual cash bonus and performance-linked incentives that are normally paid in the first quarter.

Sources said Reliance may have done some intra-division cash transfer to roll back the salary cuts in the hydrocarbons divisions.

An email sent to the company for comments remained unanswered. Reliance's hydrocarbon business was adversely impacted due to a reduction in demand for refined products and petrochemicals after a nationwide lockdown was imposed to curb spread of coronavirus.

While Ambani forgo his entire Rs 15 crore compensation, Reliance board of directors including executive directors, executive committee members, and senior leaders saw 30 per cent to 50 per cent of their compensation.