Fans lined up at the square on Saturday to take a picture beside a replica of the trophy. 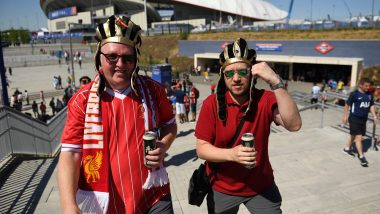 Fans arrive outside the stadium prior to the UEFA Champions League Final between Tottenham Hotspur and Liverpool. (Photo Credits: David Ramos/Getty Images)

Madrid, June 1: Thousands of English football fans draped in their team's colours gathered in Madrid ahead of Saturday's Champions League final between Liverpool and Tottenham, many still desperately seeking tickets for the match. In the central Sol square several men held up handmade signs reading "Buy tickets" as chanting supporters from both sides walked past, many carrying beers, with temperatures soaring above 30 degrees Celsius (84 degrees Fahrenheit).

Among them was Kemam Kalkavar, a Turkish engineer and lifelong Liverpool fan who flew from Ankara with a group of friends for the match and was willing to pay 5,000 euros ($5,575) for a ticket. "Watching from inside the stadium is much more exciting. It's worth it," the 50-year-old told AFP, adding that he is a regular at Champions League and World Cup finals.

Spanish police on Friday arrested a Venezuelan woman at Sol square who sold two fake tickets to a Romanian national for 4,200 euros per ticket, a police spokesman said. Another two people were arrested on Saturday for selling fake tickets near the Liverpool fan zone, police said on Twitter.

Fans lined up at the square on Saturday to take a picture beside a replica of the trophy which will be given out to the winning team while street vendors hawked souvenir Champions League final scarves to passersby. The authorities expect around 32,000 ticket-holding fans from both teams will attend the match at the 68,000-capacity Metropolitano stadium which will get underway at 9:00 pm local time (1900 GMT).

The Madrid hotel association estimates that a total 70,000 English fans will spend the weekend in the city, and they will drink a million litres of beer.

Many supporters took refuge from the scorching heat in the shade of outdoor terraces, drinking beer. Simon Erickson, a 23-year-old student from Reading near London, said he came to Madrid even though he did not have a ticket because he wanted to show his support for Liverpool.

"You feel like you are a part ot it somehow being here, with everyone else, even if you don't go to the stadium," he said at as he sat with friends at outdoor terrace in central Madrid. The authorities tried to keep the fans of each team separate as much as possible by setting up pre-match fan zones for each side in different parts of the city so that they would not share the same metro lines to the stadium. Some shops near the fan zones closed early fearing trouble.

Police arrested a British man as he neared the stadium because he assaulted officers after they found he was in the possession of drugs, police said on Twitter. While hundreds of extra flights to the Spanish capital have been added, some fans still struggled to make it to the city for the match.

Lew Cooper, a 56-year-old accountant flew with his teenage son Robert from Liverpool to Alicante on Spain's Mediterranean coast on Friday and then took a train the 420-kilometres to Madrid because direct flights were too expensive. They were among the lucky fans with tickets for the match. "It was a bit of an odyssey. But we wanted to be here to celebrate when they win," said Cooper who was decked out in a red Liverpool jersey.