For the unversed, the 1998 released film 'Dil Se..' was helmed by Mani Ratnam. Shah Rukh Khan and Manisha Koirala also featured in the film. 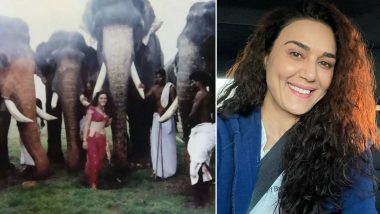 First is always special no matter what it is. To date, actor Preity Zinta cherishes the memories of her debut film 'Dil Se..'. On Thursday, Preity went back in time and recalled shooting with several elephants for the film in Kerala. Taking to Instagram, she dropped a throwback picture of her posing with elephants. Thanksgiving 2021: Preity Zinta Expresses Gratitude as a Mother By Being Grateful for 'Two New Additions' to Her Family.

"Look what I found ! This was shot on location in Kerala for Dil se... My first film shoot. I was thrilled to be surrounded by so many elephants. #Jiyajale #Dilse #throwbackthursday #ting," she captioned the post. Preity Zinta and Gene Goodenough Are Proud Parents to Twins, Name Their Babies Jai and Gia!

For the unversed, the 1998 released film 'Dil Se..' was helmed by Mani Ratnam. Shah Rukh Khan and Manisha Koirala also featured in the film.