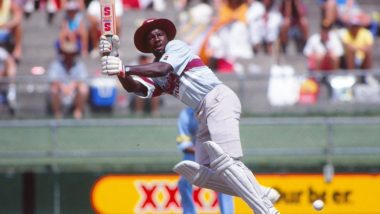 St John's, March 3: Cricket West Indies (CWI), on behalf of the International Cricket Council (ICC), on Wednesday announced the match officials for the upcoming series against Sri Lanka. The two teams will play all three formats, starting with the T20I which begins on Wednesday night (local time) at the Coolidge Cricket Ground (CCG).

Former West Indies Test captain Sir Richie Richardson will be the ICC match referee for all matches to be played at CCG and the Sir Vivian Richards Stadium (SVRS) in Antigua.

"We have worked over the years to improve the standard of cricket in all areas. It is a just reward for the match officials to be recognised for their hard work by being a part of an all-West Indian match officials team," said Roland Holder, CWI's senior manager of cricket operations in an official statement.