The three matches of the T20I series will be played on March 3, 5, and 7 at the Coolidge Cricket Ground in Antigua, which will be making its international debut. 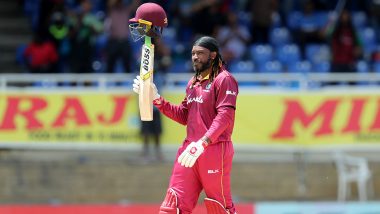 St John's, February 27: Veteran batsman Chris Gayle has returned to the West Indies squad for the first time in nearly two years for the three-match T20 International series against Sri Lanka, beginning on March 3. The 41-year-old top-order batsman was recalled to the 14-man squad under Kieron Pollard on the basis of his good performances in recent tournaments, including the IPL and and the Pakistan Super League.

Senior fast bowler Fidel Edwards, 39, is also back in the national squad after a nine-year hiatus. The three matches of the T20I series will be played on March 3, 5, and 7 at the Coolidge Cricket Ground in Antigua, which will be making its international debut. T10 League 2021: Chris Gayle Scores 22-Ball 84 in Abu Dhabi T10, With Six 4s and Nine 6s (Watch Video).

The big-hitting Gayle last played for West Indies in their home series against India in August 2019 after the 50-over World Cup that year. He had earlier said that the 2019 World Cup matches would be his last appearances for West Indies.

"As we build towards the defence of the T20 World Cup, the opportunity is being taken to determine our best team and squad as we go forward." Gayle is the highest run scorer in T20 history. He has played in 103 Tests, 301 ODIs and 58 T20Is since making his international debut in 1999.

As for Edwards, Harper stated that his recall was to "give the bowling the potent firepower needed". Edwards, who played 55 Tests for West Indies, moved to Hampshire in 2015 on a Kolpak deal. However, following the UK's recent departure from the European Union, Edwards expressed his desire to make an international comeback.

Off-spinner Kevin Sinclair earned his maiden West Indies selection and left-arm spinner Akeal Hosein got his first T20I call-up. The selection panel also named the squad for the ODI series against the visting Sri Lankans to be played between March 10-14 at the Sir Vivian Richards Stadium in Antigua.