After being held to a draw by their respective opponents in the previous round, Mohammedan Sporting Club and Sreenidi Deccan FC lock horns in their opening fixture of the Championship Stage of the I-League 2021-22 here at the Naihati stadium on Saturday. 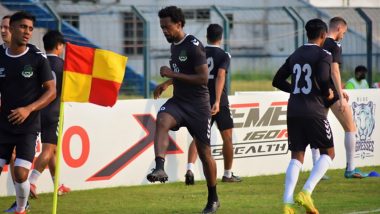 Kolkata (West Bengal) [India], April 22 : After being held to a draw by their respective opponents in the previous round, Mohammedan Sporting Club and Sreenidi Deccan FC lock horns in their opening fixture of the Championship Stage of the I-League 2021-22 here at the Naihati stadium on Saturday. Mohammedan SC head coach Andrey Chernyshov was aware of how Gokulam Kerala overturned a 6-point deficit last season to win the I-League but he did not want to rely on such statistics. Kylian Mbappe Transfer News: Roberto Carlos 'Confirms' PSG Star is Coming to Real Madrid (Watch Video)

"Being second in the table gives us a chance to fight for the championship. We know what happened last season but that was a different story. In football, anything is possible," he said. Despite winning 3-1 against Sreenidi Deccan in the reverse fixture this season, Chernyshov was not taking anything for granted. "It was a tough game against them last time. It is a really strong team with good players and an experienced coach. We will analyse them and be prepared for the game," he said. The Black and White Brigade will be without star defender Shaher Shaheen while Asheer Akhtar is also a doubt heading into this game.

Sreenidi Deccan head coach Fernando Santiago Varela was full of praise for the way his side had played against teams above them in the table. "We have shown our character and determination in every game, even in the games we lost against Mohammedan SC and Gokulam Kerala, which I feel we dominated. It is not easy to implement this style of play but we will continue to do the same and show what we can do," he said. Pele Discharged from Hospital After Cancer Treatment

Varela also pointed out how his side has become better at the back recently with goalkeeper Aryan Lamba yet to conceded a goal since stepping in for the injured Shibinraj Kunniyil.  "We have improved defensively, having kept clean sheets in the last two games. We also created a lot of chances so we will continue to do the same. This team has a lot of character and they have shown that throughout the season," he concluded.