Get latest articles and stories on Sports at LatestLY. Sunrisers Hyderabad skipper Kane Williamson has called Kolkata Knight Riders' Andre Russell a 'threat' after his impressive performance on Saturday night. 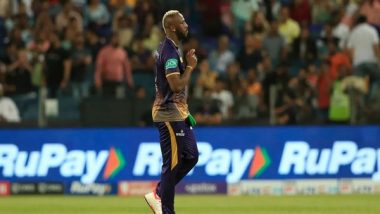 Russell scored unbeaten 49 runs with the bat and took three wickets with the ball to guide Kolkata Knight Riders to a 54-run win against Sunrisers Hyderabad here at MCA Stadium in Pune on Saturday.

"I mean largely the first half was good. Dre Russ is always a threat. Showed his class. We tried to create partnerships but KKR were really good. We have been struggling with creating momentum in the last few games. Sundar stepped up in the last over. Using our resources a little early didn't work for us today," said Williamson in a post-match presentation.

"We wanted to get off to a good start. We wanted to get some momentum. There were glimpses and signs but wasn't to be. The run rate got up and we were not able to pull it back. The game teaches us lessons and I am learning it right now," he added.

KKR now are currently at sixth position in the points table with 12 points. SRH are at the eighth position with ten points. (ANI)